So, the drone enthusiast inside of you wants to snag a new quadcopter.

Maybe your kid has been eyeing one of your premium crafts, or a friend wants to get into the hobby, or you’re considering one for yourself.

As a general rule of thumb, the pricier it gets, the better it performs. That said, we’re looking at a cheap drone today in buzzing black and yellow colors.

Can it perform to a level that delivers value?

Tune in for an in-depth Altair Aerial 818 Hornet review and find out if it’s worth picking up for yourself or a loved one. 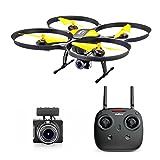 The Altair Aerial 818 Hornet starts its operational life with a user-friendly feature in the form of the One-Touch Takeoff and Landing function. This is handy for amateurs who want to get directly into flying the drone, forgoing precious minutes wasted on trying to figure out how to take off or land.

This also ensures that the drone has a minimized risk of crashing at the start of a flight, which often occurs when newbies initialize flight for the first few times.

While this is no expert photography drone, it’s nice to know that an altitude hold function is present, making the limited photo and video quality that it has capture viable film with the stability the mode offers. This also serves as a pseudo-parking function, keeping the drone in place while you do what you have to do in the meantime.

Before you go bursting into expletives figuring out what in the world Heading Hold is, it’s just Altair Aerial 818 Hornet’s term for Headless Mode — a feature seen in almost every drone on the market. This allows the drone to “forget” its own front-end orientation and instead relies on the pilot’s own front-end position to fly.

This means that the drone will fly in whichever direction you push the control lever towards. You won’t have to constantly do mental gymnastics to figure out which way the drone’s front end is facing, especially with the rather confusing 3D positioning in normal flight mode.

The Altair Aerial 818 Hornet can also perform an abrupt halt in case of emergencies. Aptly called Emergency Stop, it has a dedicated button that you need to hold for about a second to kill all power to the motors, letting the drone drop dead from the sky.

You might think that’s like killing a chopper’s engine when it’s thousands of feet off the ground, and yes, it kinda is.

While the risk of damage is inevitable, it helps in situations like losing control of the drone due to environmental factors such as wind forcing the craft into an inaccessible area. It’s better to have a broken drone than a lost drone. Use this feature sparingly, it’s needless to say.

The Altair Aerial 818 Hornet has a 1000 mAh battery that gives you about 13 minutes of flight time, give or take. This is pretty much average when compared with competing models. Some can do better, many do worse.

Altair Aerial even give you an extra battery pack to double that number. Not bad.

For charging time, the batteries take about 2 hours to replenish to their full level. Again, this isn’t the worst considering there are 10-minute drones out there that charge for over four hours.

For optics, there’s a 720p HD camera with 120° of field-of-view capabilities. While we wished they’d bump it up to 1080p, the camera works admirably under most shooting conditions. Low-light conditions can impair image quality, resulting in grainy and blurry shots.

The camera has no stabilization gimbal but is encased in a rubber sheath that acts as a dampener for vibrations. It doesn’t do much in terms of video shots while in motion, but for hover-mode shots, it absorbs most of the motor-induced shudder quite effectively.

More than that, the Altair Aerial 818 Hornet is also capable of streaming an FPV feed directly to your smartphone with the help of its FlyingSee app, but only in a limited range of up to 60 meters. The app also gives more camera settings that can be tweaked, as well as other drone functions.

The professional-looking controller is proof that the format is slowly gaining popularity even in the entry-level market. It sports dual joysticks and special function buttons, which are neatly spaced from each other. There are nonfunctional buttons, though, which perhaps indicate that they aren’t manufacturing their own controllers and are instead using third party transmitters.

The awkward positioning of the speed selection button and trimmer toggles at the back of the controller make them prone to accidental triggering, which could have been avoided if they were placed on the top end instead.

It is also equipped with an early warning system of some sorts in case of low battery levels or as the drone nears its flight range limit. The controller lets out a series of beeps to alert you of such circumstances. Not the best implementation, to be honest, but you gotta work with what you have.

The controller also comes with a cardboard cutout with button labels and descriptions, which can be helpful for beginners to quickly familiarize the controls and their corresponding functions.

The Altair Aerial 818 Hornet is based on the quadcopter design that relies on the frame of its propeller guards to carry its overall shape. The rounded, soda can ring aesthetic is either a love it or hate it affair, but for the sake of protecting the drone (and fingers too), we’re allowing it.

The drone has a fairly lightweight profile, and is just 2 grams shy of FAA registration, making it a portable bird to carry wherever you go without any need to register it (in the US or UK, at least, laws vary in other countries).

In the looks department, the yellow and black color scheme surely alludes to its “Hornet” title, though we couldn’t unsee its propeller rings as googly fly eyes. Now you can’t unsee it either.

The 818 Hornet doesn’t pull punches for a drone its size, given its three-speed mode that allows you to choose between slow, medium, and fast presets to match your piloting skill. This also affects yaw sensitivity, limiting the turn rate of the drone to allow beginners to ease into the movement and control synchronization.

Speaking of synchronization, the quadcopter responds seamlessly to your control inputs but is limited to a range of about 150 meters. This is isn’t the best amount of ground to cover, and it would’ve been better if it was doubled it to maximize practice flights or cinematography maneuvers.

Balance is fairly good as well, except when the winds pick up, as the added frame material of the protective ring introduces drag to the system, making it more prone to drifting, and it being lightweight doesn’t help either. If you’re planning to fly it outdoors, ensure that the winds are placid at best.

The Altair Aerial 818 Hornet’s combination of features make it a viable drone for beginners, especially youngsters who are trying to get into the drone scene.

Assistive flight features such as Heading Hold and One-Touch Takeoff and Landing make the maiden flight an easier task to overcome, though it’s not really a task when you’re enjoying it, right?

The generous flight time and the inclusion of an extra battery pack allows you to squeeze more fun out of it, and the 720p camera introduces you into a birds-eye view of the photography world. Not bad.

But let’s get back to our main concern: is the Altair Aerial 818 Hornet a viable drone for you or someone you care about? The answer is a resounding yes if your budget doesn’t extend any further.

As is the case with many things, if you can afford to increase your budget, you’ll be able to get something better. But at this price, there aren’t many that can compete, with preference of design often being a decisive factor.