While entry-level drones are getting cheaper and cheaper by the minute, it’s always nice to know that upper-tier models around the $100 price bracket exist to plug the gap between the aforementioned dirt-cheap territory, and the mid-range level of products.

For those who want uncompromised performance and features in their first drone, spending for a unit in this price range is virtually a no-brainer. You can get some quality whilst not sacrificing a whole load of cash on something you might crash as you get to grips with flying.

As for another contender in this upper end of the entry-level spectrum, the Altair Aerial AA108 bares its fangs against competitors, boasting specs and features that cater to the clueless amateur pilot.

This US brand is a dark horse in the drone scene, with a bare catalog to work with. Nonetheless, it has captured the attention of amateurs and enthusiasts alike.

But does this stylish little UAV measure up to the expectations, or does it belong to the failed hype train bin? Find out in this thorough review of the Altair Aerial AA108. 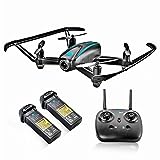 The Altair Aerial AA108 doesn’t disappoint with its inclusion of a Headless Mode. Perfect for beginners, as well as nighttime flight, Headless Mode has the drone completely ignoring its front-end orientation, effectively making the pilot’s and the drone’s front assume the same direction. This makes for a more straightforward control experience, as a left command on the directional lever will command the drone to turn left, right will go right — you get the gist.

This mode should be a must-have for every drone in the entry-level bracket, allowing amateurs to ease into the flight controls without worrying about keeping tabs on the drone’s positioning on the 3D axis.

Easily take off or land at a whim, as this sleek drone has a One Key Takeoff and Landing function. This is handy for beginners not wanting to crash the drone when initiating flight or recovering the drone by automating the process with just the push of a button.

Furthermore, this function also acts as an emergency brake feature, which can be activated by long-pressing the dedicated button in the event that a crash is likely to happen, or if you want to immediately stop the drone’s operation, shutting it down mid-air. While the craft might sustain damage from the fall, you might want to make the trade-off instead of having the drone drift off into the unknown.

Just like higher-end drones, there is a nifty waypoint function called the Custom Flight Route, which makes use of a smartphone app to access. You can set a path via the app, to which the drone will fly along, making it a handy feature to have when you are relocating piloting positions, giving you a hands-free experience when doing so.

The Altair Aerial AA108 can hover in place with its Altitude Hold function. This is useful when wanting to take photos and videos where stability is needed, as the drone doesn’t have a gimbal built into the optics unit. Just activate the mode and watch as the drone flies and hovers at a prescribed altitude, giving you uncompromised shots from a stationary viewpoint.

Unfortunately there’s no GPS in this model, meaning if some wind moves your drone whilst it’s in the altitude hold mode then it won’t actually know that it’s been moved. Higher-end drones with GPS accurately track their own location, meaning they’ll fight against gusts to remain in position.

Because of its lightweight frame and lack of GPS, the AA108 is rated for indoor use only.

Using the smartphone app, the AA108 can make use of its Gravity Induction mode. Basically, it makes use of the smartphone’s gyroscopic sensors to dictate the directional movement of the drone, as tilting your phone to the left has the craft emulating the movement, and applies for any direction you move your smartphone towards.

Shipping with a small 350 mAh battery, you’re likely to get around 8 minutes of flight time as a best result. Whilst some units in this price range might just about reach 10 minutes, a couple of minutes is neither here nor there.

Besides, Altair Aerial go some way to fixing this with a practical solution; adding an extra battery pack to the kit to double your flight time for extra minutes of practicing maneuvers.

Topping it up to full health takes about an hour of charging, and the company bundle in a USB charging cable that accepts any standard USB port in power banks, computers, and charging bricks.

Low battery levels are indicated by an alarm system that is integrated into the remote controller, which goes off as soon as the charge level plummets into dangerous territory. Crude solution, but effective nonetheless.

The Altair Aerial AA108 has a 720p HD camera that offers wide-angle capabilities of up to 120° in field of view coverage.

While 720p optics are common with drones of this price range, this does offer decent shots of photos and videos, with enough clarity to properly capture details, albeit lacking in the color reproduction department. It also doesn’t have stabilization properties, so opt for the Altitude Hold mode for taking shots, whenever possible.

FPV flight is also possible thanks to the FlyingSee smartphone app, giving you a live feed of the drone’s camera and offering a better piloting perspective especially when paired with VR glasses. The FPV live feed is limited to a radius 50 meters, though, cutting out frequently as it reaches the limit.

Altair Aerial opts for a more enthusiast-inspired design with the controller, a smooth block of matte-finished plastic that doesn’t weigh a ton, making it comfortable to hold during extended periods of flying.

It sports a dual joystick layout, which is surrounded by function buttons at optimal distances across each other, such as the Headless mode, One Key Takeoff/Landing, and Power buttons.

There are two nonfunctional buttons at the top end of the controller though, and we’re guessing this is due to the Altair Aerial AA108 using the same controller as its higher-end family members, albeit lacking the functions that are supposed to be tied to the said buttons.

The basic quadcopter design is adopted by the Altair Aerial AA108, albeit sporting a sleeker look that does away with the chunky hulls and arms found in most drones of this price bracket. This doesn’t take the drone’s aerodynamics away though and, when paired with its lightweight profile and petite footprint, it makes the drone a formidable craft as it takes to the skies.

Durability is no issue as the AA108 is mostly constructed from rugged ABS plastic, which is more shatter-and-shock-resistant in comparison to standard plastics used in cheaper drones.

The matte finish also matches that of the controller’s, giving you a premium vibe that a gloss coating will rarely achieve on plastic.

Despite being pretty cheap, it certainly zips by with its three-speed function that you can adjust depending on your skill level or desired sensitivity. More than speed, this alters the drone’s yaw sensitivity, allowing for tighter turns at high speeds, making the craft perfect for indoor flying, where confined spaces are a primary cause of concern.

Response times are commendable as well, swaying to your control inputs instantaneously, allowing you to synchronize with the drone’s visual movements.

Be wary when flying outdoors, though, as this flying nugget’s lightness does little to buffer moderate breezes, making it prone to crashes as the winds pick up. That’s why this quadcopter is rated for use indoors — and only indoors.

While its generous 100-meter range is more than enough distance to practice your maneuvers and cinematography skills without compromising safety, the controller also has a beep alarm that alerts you as you near the range limit of the drone, giving you enough headroom to adjust your flight path back to safety.

So far, so good. The Altair Aerial AA108 has been giving us consistent points to recommend it to beginners wanting a starting platform to practice their skills on.

The drone itself is a solid piece of technology, with vital assistive features packed into a portable design. But more than the impressive build quality, the bird’s flight performance is nothing short of stellar, almost pulling you in with its easy and intuitive controls, as well as the level of response it displays on the field.

One thing we think that the Altair Aerial AA108 is missing, though, is a GPS feature. Some drones in a similar price stratum already come equipped with a basic GPS module, giving them extra stability and smart safety functions that can only function with the aid of the said system.

That being said, it isn’t seriously crippled with the lack of GPS functionalities, holding its own pretty well against more modern crafts.

Sitting comfortably at the upper end of the entry-level spectrum, the Altair Aerial AA108 is a fun and capable drone to fly, giving you the much-needed starter knowledge before diving into more advanced UAV territory.