Are you ready to move on from dirt-cheap, amateur toy drones and get yourself a toy for the big boys? Altair Aerial might have something to offer you.

Competing in the mid-range market is their very own Altair Aerial Outlaw SE.

The Outlaw SE is a competitively-priced option when pitted against brands like Holy Stone, DJI, and Potensic, sitting firmly in the lower-to-middle pricing tier.

But apart from price, the craft tries to lure potential buyers in with its mix of features and specs, which include a 1080p HD camera, beefy flight time, considerable flight range, and more.

But it’s all well and good looking impressive on paper. How did it actually fair when we tested it out?

Find out as we dive deep into the nitty-gritty in this Altair Aerial Outlaw SE review.

The Altair Aerial Outlaw SE doesn’t lag behind its contemporaries with its very own GPS module that activates the GPS Flight mode of the drone. With this, the drone taps into orbiting satellites up above to triangulate its position, giving it access to its exact location in real-time. This requires about 7 satellites in range to work, which the controller displays on its LCD screen.

When the mode is active, the drone stabilizes automatically, making it hover in the air when no control inputs are triggered. It also makes for a safer, more balanced flight performance as the sensors and the motors automatically adjust to the wind conditions and your operational settings simultaneously.

You might encounter problems with controlling the craft in this mode, though, as the Outlaw SE protects itself by automatically tweaking its flight performance, so expect some resistance from the machine when wanting to do agile maneuvers with the mode on. You can turn it off, though, which gives you back the level of control and sensitivity without GPS assistance hindering you.

If you’re a beginner but want to take the Altair Outlaw SE out for a spin, its Headless Mode has got you covered. Headless Mode has the drone forgoing its front-end’s orientation, and will now base flight movement on the direct control inputs of the pilot. 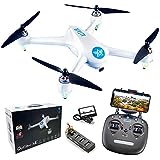 This means that your front will be the same as the craft’s front, and when making a leftward motion with the directional lever will have the drone turning left, right for right, and so on. This will take away the confusion that comes with constantly monitoring the drone’s orientation in normal flight modes, which has you keeping tabs of the drone’s position in the 3D plane at all times.

This mode is also potentially helpful when the drone is flown at a considerable distance or when flying at nighttime, where it is hard to get visual cues of where the drone is facing in real-time.

This UAV is capable of automated takeoff and landing with its One Key Takeoff and Landing function. With this, you won’t have to fumble around when wanting to initialize or retrieve the drone, which can be crucial maneuvers to perform. Most newbies crash their drones at the takeoff stage, so it would be wise not to underestimate the purpose of this feature.

You can also use it if you’re feeling extra lazy and just want to get things over with.

The Altair Aerial Outlaw SE lets you take stable photos and videos without the need for cumbersome tripods with its Altitude Hold Mode. Just activate it and the drone will automatically hover at a designated height, allowing you to frame your shots accurately and without blurriness, despite its lack of camera stabilization.

A Follow Me mode has this quadcopter follow your every step by locking onto the GPS signal of the controller, allowing you to shoot third-person perspective videos and pictures without needing to maneuver and simultaneously compose your shots, giving you an extra hand when shooting solo on your adventures.

The Return To Home feature makes use of the craft’s GPS to track its way back to you, so it only functions when you’ve flipped GPS Flight Mode on. While we understand that the GPS is toggle-switched for flight convenience, we wish that Altair Aerial would’ve made this feature as a bypass, increasing the safety of the craft while mid-flight.

Return To Home automatically kicks in in the event of low battery levels or loss of signal transmission, or you can manually activate the mode to recall the drone at your bidding.

This mode also ensures the drone doesn’t plummet in the event that the battery runs out before getting back to base. It allocates some power to the motors to supply the drone with a gentle descent in events like this.

The Altair Aerial Outlaw SE sports an 1800 mAh LiPo battery that gives it about 18 to 20 minutes of flight time. This is rather impressive for a kit this price, as some of the best quadcopters in this bracket only tend to offer 15 minutes of juice on a good day.

If you want extended periods of flight without being limited by the lengthy battery charge time — this recharges in a full 4 hours — you can always snag up extra battery packs online for cheap prices.

There’s a 1080p HD camera that’s fixed at a slightly lowered angle and is attached at the front of the drone’s hull. This gives you the ability to capture stills and footage with better detail than 720p cameras, though it might be a bit unfair to compare the two resolutions when price is a factor here.

Details pop out very well even at this resolution, and stability doesn’t seem to be the worst, although some sort of stabilization solution can improve the capture quality greatly. Color accuracy isn’t really the strong point of the camera though, but professional-grade photos shouldn’t be the aim with this drone anyway.

FPV flight is also possible through the Altair Aerial Outlaw SE’s smartphone app, which you can access for a better view of the drone’s flight path. It can go up to 500 meters in supplying you with a live feed of the camera’s view, but footage cutting off is expected once you get closer to the limit.

With that being said, the FPV feed doesn’t require you to install a micro SD card but taking photos and videos do, so ensure you’ve slid one into the card slot to save those precious memories.

The professional-looking controller goes with a flat black finish, which gives it a classy appeal even at the drone’s affordable price range. The basic layout is to be expected with the craft’s controller, featuring dual joysticks, dedicated function buttons such as GPS and Headless mode, trimming buttons, and a small LCD screen at the bottom for basic telemetry readouts like battery level and the number of satellites the Outlaw SE is connected to.

It takes in 4 AA batteries though and consumes power a lot faster than most controllers, so be sure to get rechargeable ones in order to save bucks in the long run.

The Altair Aerial Outlaw SE has a quadcopter layout that takes inspiration from modern designs, giving it that sleek, aerodynamic look that is popular with most of the drone community. Constructed from a durable material, which we infer is ABS plastic, that allows the craft to be solidly built and protect it from damage in the event of unavoidable crashes.

There are no separate landing gears, though, relying on its protruded motor housing design, that also encloses the LED units, to serve as landing feet for retrieval purposes.

This bird carries some heft into it, so check in with your local flight authorities to register it in accordance with regulations. This also means that the drone is fairly stable in flight, able to withstand considerable breezes with no performance hits whatsoever.

The Altair Aerial Outlaw SE is super responsive to your control inputs, making it a seamless affair when flying. While signal degradation is unavoidable when you’re pushing the craft to its range limit, the Return to Home system kicking in (only when GPS Flight Mode is active) does much to ensure your sanity should you lose control of the craft.

For speed, it’s definitely a nimble bird — despite the weight it carries — but you’d have to consider the trade-off between having GPS Flight Mode on or off, whether you prefer maximum maneuverability or balance and safety. Either way, the Outlaw SE doesn’t disappoint, making it a win-win situation for your eager pilot spirits.

The Altair Aerial Outlaw SE is another success story in the hobby drone space, giving its potential customers a wide variety of features to work with, including cinematography assistance, simplifying flight operation, and safety functions that all work together to make the whole experience exciting and educational.

Some shortcomings like minor transmission issues and a poorly-developed smartphone app had us shaking our heads at times, but it doesn’t take away the fact that the Altair Aerial Outlaw SE shone outstandingly in terms of user-friendliness and general practicality.

Whether you’re wanting to try out your drone cinematography skills or just want to improve your piloting mettle, the Altair Aerial Outlaw SE gives you the right balance of features and specs to make it all worthwhile.