Getting into professional drone cinematography has never been easier in present times — assuming you have the bank account to back it up.

Most drones in this area run from $800 upwards, making it a pricey investment that needs some time deliberating in order to get the specs and performance you really need. That being said, you have to consider what kind of videos and pictures you are trying to shoot.

As a general rule of thumb, anything at the upper end of the spectrum can usually chew through whatever you need it to do, and even leave some headroom for more demanding tasks without breaking a sweat. Then again, this only works if you don’t have a spending limit on your wallet, and of course there are always hidden gems in every price bracket.

For those seeking the perfect balance of price to performance, photography drones have to provide premium-quality shots, while being extremely versatile in terms of flight performance and maneuverability. This is where the Evo comes in, from the US-based manufacturer Autel Robotics.

The Autel Evo aims to go toe to toe with the DJI Mavic 2 drones, but does it have the mettle to do so? Find out in this thorough Autel Robotics Evo review. 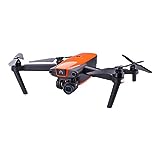 For its price, the Autel Robotics Evo better have a dual GPS and GLONASS system. No surprise here though, as the premium photography drone goes for the added functionality in location and positioning with the massive satellite reach this configuration offers. This only means that the drone is able to maintain a stable hovering performance or go in an automated flight preset without drifting whatsoever.

Furthermore, the redundancy offered by this dual system keeps the Autel Robotics Evo safe in the event where one of these modules should fail. The remaining active positioning system will take over and ensure that the craft doesn’t lose its bearings while in flight.

While some drones in this price territory may or may not have such functions, the Autel Robotics Evo does well to pack one.

With the help of extra cameras and IR sensors that are positioned at the front, rear, and belly of the drone, it can effectively gauge the distance between obstacles to avoid collisions, and immediately reroute the drone to a safer flight path.

Do note that it can only detect close-proximity obstacles, so be wary when backing up in confined spaces. Also, the obstacle avoidance feature doesn’t work when reversing, instead offering you a warning to alert you, so don’t be too lax when doing so.

Whilst some drones with obstacle avoidance will simply hover in place rather than go hurtling into the tower that stands in its way, the Evo does its best to navigate around it and continue on its course.

Though the Autel Robotics Evo is definitely targeted at drone users with some flying experience, it still carries the One Key Takeoff and Landing feature with it. This gets rid of the awkwardness in trying to initialize the drone for the first time, or when landing the drone.

At this price point, you should have a good amount of flying hours under your belt already, so this nifty function has nothing more to offer but provide a seamless shooting experience by way of automation.

If you’re desperate to buy this as your first drone, you should probably pick up a cheaper option alongside it to learn the ropes of drone flying — something like the Potensic T18, perhaps.

The Autel Robotics Evo is secured even in usually unavoidable flight circumstances or errors like low battery levels or loss of transmission signal, thanks to its Return To Home function.

Assisted by the GNSS (GPS + GLONASS) module, the drone can immediately trigger the feature when potentially disastrous events happen, keeping the drone safe from damage or accidental loss.

You can also manually prompt the feature for easy drone retrieval. The Autel Robotics Evo does this by recording its initial takeoff position with the GPS function and backtracks its way to the point when active. Paired with an obstacle avoidance system, the Autel Robotics Evo has never been in safer hands.

If you want to do a comprehensive, full 360° sweep on a subject, the Orbit function can perform it for you with almost-eerie accuracy. On the Autel Explorer smartphone app, select your desired subject and watch as the Autel Robotics Evo circles around it while capturing footage, giving you a cinematic shot preset that doesn’t need any manual composition to perform.

The Autel Robotics Evo also has a Waypoint function that can be accessed on the Autel Explorer app, allowing you to plot a predetermined flight path for the drone to follow. With the accurate location and positioning features of the drone, bringing up the map gives you a real-time reconstruction of its position.

This is handy when wanting to change locations or control the camera perspective, allowing you to focus on one thing and let the drone fly the path intuitively.

This is the Autel Evo’s Follow Me mode, where it actively seeks your selected subject and trail behind it to capture third-person perspective videos.

This is useful for solo excursions when you want to shoot scenery while keeping your person in the frame, or when you need to follow a specific subject without compromising camera controls.

The Autel Robotics Evo’s Dynamic Track is slightly behind in terms of reliability when compared to DJI’s own, though, as it experiences some difficulties in keeping up with fast-moving objects. For everything else, it seems to do the job nicely.

The Autel Robotics Evo is equipped with a beefy 4300 mAh LiPo battery that boasts up to 30 minutes (on paper) of sustained flight.

This can vary depending on the operational conditions, but we expect nothing less for a drone in this higher price range. Still, these numbers are impressive considering some of its pricier counterparts have a 5-minute flight deficit when compared to the Evo.

We’ve found that, depending on usage, actual average flight time seems to come out at around 23-25 minutes.

It would be great if manufacturers could be a little more transparent with the real-world performance of their drones, although they are all providing a ‘maximum’ and not an ‘average’ flight time — assuming perfect weather conditions and no use of battery-draining features.

That being said, if you plan on using the Autel Robotics Evo for videography — or almost any drone for that matter — we suggest securing extra battery packs for extended periods of shooting to maximize your content creation timeline.

The Autel Robotics Evo boasts a 4K UHD, 94° FOV main camera that can shoot videos up to 4K at 60 fps, or 1080p at 120 fps. This makes the drone viable for slow-mo sports shots or chase scenes, giving you super-smooth footage while maintaining that high level of detail consistently. It can also take 12-MP stills in single or burst shots, offering flexibility in your desired shot results.

While the Autel Robotics Evo has an auto mode that takes care of dynamic range, exposure, and contrast, we feel like going manual with your settings is the way to go, as auto gives your shots a bluish, cool hue that might not work with every scene you capture — though looks amazing on others.

Stability is ensured with the Autel Robotics Evo’s 3-axis gimbal, giving it reduced shudder capturing capabilities even at high speeds or windy conditions. The gimbal is decent enough for a drone this pricey, but we’re not sure if it bests the DJI drones that it’s competing with in terms of stabilization.

There is also some noticeable propeller intrusion at certain angles, which might put off purists.

That being said, while not being the best in the industry in the camera department (except for the neat 4K 60 fps feature), the Autel Robotics Evo is no slouch when it comes to pictures and videos. If you’re looking to take awesome photos and premium-quality film footage, the Evo is certainly capable.

The Autel Robotics Evo has a rather petite controller, which we didn’t expect considering the drone’s price premium. You’ll often find large transmitters are opted for at higher budgets. Still, it is outfitted with the usual dual joystick layout and dedicated function buttons on its face.

What sets it apart from other controllers, though, is the included 3.3 inch OLED screen that can either be used to display telemetry data such as speed, battery level, and signal level, or tap into the drone’s live feed, omitting the need of a smartphone for such purposes.

Of course, you wouldn’t want to miss out on the additional features that the Autel Explorer app offers, so the controller still has an adjustable bracket to mount your smartphone on. This way, you can split the FPV’s live feed and telemetry stats on the separate screens for convenience and organization.

The Autel Robotics Evo’s controller has a much-beefier 6300 mAh, leagues better than the drone’s, but we infer that the craft’s size limitations don’t allow it to carry a fuel tank of such capacity. Some of the buttons could be better positioned in our opinion, though it’s simply a matter of getting used to it.

While the Evo takes design cues from competitors, the drone’s own personality was tweaked to give it better stability and overall structural integrity. The moderately-hefty quadcopter has ergonomically-optimized arms that do not overlap when folded, making portability a seamless experience.

It’s constructed from durable materials as well, which we think has the majority of its parts made from ABS plastic, among others. Crashes are more than welcome to happen — though of course should be avoided if possible. The drone is more than willing to take a bit of rough and tumble, especially on more demanding flight circumstances.

Aesthetics-wise, the Autel Robotics Evo has a mix of glossy orange and matte black going on with its color scheme, which gives the drone a unique appearance, standing out in a sea of boring, plain black quadcopters.

It features LED units on the motor’s bottom section that highlights the drone’s orientation, as well as offer added visibility during nighttime flight or low-light conditions.

The Autel Robotics Evo is a dream to fly, despite some of its design drawbacks.

The drone is given a generous helping of performance mojo, as it responds seamlessly to your control input’s, bidding in real-time accuracy. Its balanced profile contributes to the swiftness of this UAV, clocking in at 45 mph unhinged, which also improves flight stability even in the presence of rough gales.

The impressive 7 km range makes the Autel Robotics Evo viable for long-range shooting, though we doubt you’d cover the entirety of its range without running low on battery or potentially facing legal issues about not flying within your line of sight.

You might have to recalibrate your Evo from time to time, though this isn’t overly unusual in the drone space.

Before anything else, the Autel Robotics Evo has us doing oohs and ahhs at every point of testing, from flight performance, camera results, and ease of use.

The drone is very responsive to your control inputs. Range and battery life are competitive with other well-known models, and app integration has never been smoother. But does all of these warrant its place in the $1,000 bracket?

Whilst a bump in your budget can get you the likes of the Mavic 2 Pro, which has enthusiasts bewitched with its professional cinematography value, as well as impressive real-world performance, the Evo certainly does a good job of putting up a fight at a saving of at least a few hundred dollars.

We recommend going for the Autel Robotics Evo should convenience trump fanboyism, and if budgets allow.