DJI: a name you frequently hear when you ask drone veterans and enthusiasts about what brand to buy.

They have rightfully earned this reputation; the quality of drones they have been pushing out over the past couple of years has been nothing short of stellar.

Speaking of something that came out a couple of years ago, the DJI Mavic Pro made serious waves in the market on its debut. It was the original portable, pro-footage capable folding drone when it came out, and meant serious business with the specs it was outfitted with.

Since its release in 2016, DJI has launched newer iterations (such as the Mavic Pro 2) and other models that offered the same capabilities, albeit being equipped with newer functions and specs.

Since the original Mavic is still being offered by the brand, we decided to find out how it fares along with its kin in this DJI Mavic Pro drone review. 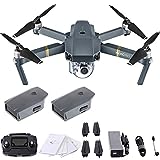 FlightAutonomy is an all-encompassing positioning and sensing system designed by DJI to accompany most of its drones, the DJI Mavic Pro included.

The craft’s GPS/GLONASS, IMUs, visual positioning system, and obstacle sensing system are all working together to make flight performance as stable as possible.

This also ensures that the DJI Mavic Pro doesn’t drift off when set to hover, which can happen with drones when its positioning system isn’t accurate.

TapFly allows you to utilize a local map to plot the DJI Mavic Pro’s flight path with just a tap on your smartphone screen, courtesy of the DJI Go 4 app. You can set a predetermined path for the craft to fly on, or do a real-time tap journey to guide it to your desired location.

Just like any other DJI drone, the Mavic Pro has the ActiveTrack function embedded in its system, allowing it to recognize objects and based on their type, match their speed when tracking them while shooting. This allows you to get quality footage with a consistently balanced pace and action.

DJI has one of the best obstacle detection features in the market today. Using its main camera and multiple sensors and range finders strategically placed on its hull, the Mavic Pro can detect obstacles in front of it up to 15 meters away, allowing it to act accordingly to avoid it and reroute its flight path to a safer position.

Intended for close-range filming and shooting purposes, the Gesture mode of the Mavic Pro recognizes your hand movements with its pre-programmed presets and lets you take pictures or videos with just a wave of the hand. This feature is perfect for selfies, letting the Mavic Pro frame the shot properly before pulling the trigger.

The Mavic Pro allows you to lower the control sensitivity of its movements, which can be helpful when you want super-stable shots of your videos, meaning there’s a lot of headroom left when you move that joystick.

You can also use this mode to let a beginner ease into the controls of the Mavic Pro. It might be a bit sluggish for a more experienced pilot, but it will be perfect when introducing it to your non-drone enthusiast friends.

For a drone of this price point, a Return To Home feature is quite handy in the event of low battery levels, loss of transmission signals, and other unavoidable errors. The Mavic Pro records its initial takeoff location, which it automatically accesses when it needs to activate the Return To Home function. You won’t have to worry about your craft’s whereabouts as well, as the obstacle-detection feature is also turned on as the Mavic Pro finds its way back to you.

The 3830 mAh Lithium Polymer battery in the Mavic Pro packs a lot of flight juice, clocking in at 27 minutes, give or take. This is incredibly impressive for a drone in this price range, as you can cover a lot of ground and filming time with just a single battery pack.

Replenishment time isn’t too bad as well, with a maximum of one hour charging before being back to full level, making it extremely efficient if it can pump that amount of juice back in your battery in that span of time.

If you’re still feeling the fight time is a bit too short for your liking, you can always purchase an extra pack, which will set you about $100.

The Mavic Pro sports a 1/2.3” 12-MP CMOS sensor camera that shoots resolutions of up to 4K, but is limited to 30 fps on videos.

The DJI Go 4 app allows you to unlock multiple shooting options within it, like setting the camera to automatic or do a full manual rein over it, giving you better control in taking photos and videos. You can also control the camera position with an up and down movement, changing your perspective at a moment’s notice.

More than its filmmaking purposes, the Mavic Pro’s camera supplies a live video feed to your smartphone at 720p or 1080p (depending on the mode of connection to your transmitting device).

With the aforementioned intuitive features and safety functionalities of the Mavic Pro, it isn’t hard to fly this bird even if you have little-to-no experience.

Its’ controller layout follows the industry standard with the double joystick layout, general function buttons and dials, and a miniature screen to display stats such as battery level and distance. You can hook your smartphone to it with via cable, and prop your phone on the built-in clip holder for maximum convenience.

The controller also mimics the Mavic Pro in terms of portability, as it is foldable and transforms into this neat little package you can stash away easily, as it doesn’t have much of a footprint.

The collapsing arms of the Mavic Pro is one of its best design points, being almost a sixth of the size of its bigger relatives such as the Phantom Pro 4. This means the petite craft can fit in most small pockets and compartments in your bags.

The hull and most of the Mavic Pro’s components are either built from durable plastic and metal, taking the aesthetics to a premium level without compromising build quality. This means the craft is crash-ready in the event the obstacle detection system fails on it, or other unforeseeable circumstances.

Its landing gear is a bit on the short side, though, and you might want to plan your takeoff/landing area to be as flat as possible, to combat any sort of clearance issues you might encounter.

Just because the Mavic Pro is small, it doesn’t mean it’s built like a toy drone. The drone has an internal cooling fan to keep the mini supercomputer’s temperature at bay.

LED indicators are present on the propeller bases and on the rear of the hull, letting you know when the Mavic Pro is good to go. Also, LED bling isn’t unheard of in this field.

The Mavic Pro is a fast bird, make no mistake. Once you flip into Sport Mode, you can achieve a 40 mph speed easily.

The healthy 1.64lb weight doesn’t even affect this, and only helps the Mavic Pro in balancing in windy conditions. Be warned though, the sport mode will disable the obstacle detection system in order to allocate power to performance.

Response is top-notch, with every input you make on the controller or the DJI Go 4 app transmitted instantaneously with the powerful signal and extended range the craft has. Just like the forward speed of the Mavic Pro, its ascent/descent performance is truly commendable, swiftly changing altitudes based on your preference.

With this, you may think that landing or taking off to be a burdensome task, but the intuitive software assists you every time you do so, minimizing the human error factor in these maneuvers.

It’s been a long time since the Mavic Pro was released in 2016, but its purpose and quality stays true to this day.

Excellent ergonomics, well-balanced features and specs, strong performance, and all at a justifiable price point.

It certainly isn’t a slouch when placed side by side its more recent counterparts, proving DJI has struck design and engineering gold with this mini-sized bird.