It’s not every day that you find an opportunity, commit to it, and then successfully crush it altogether.

DJI seemed to be at the right spot at the right time as the growing need for self-gratification in today’s generation just happened to open a door of marketable ideas.

Thus, the Spark was born, out of necessity and vanity. Introduced as the world’s leading selfie drone when it debuted, it didn’t need any more marketing stints other than that.

Flocked by first-time fliers, enthusiasts, and those who wanted to take “extreme” selfies, the quirky newcomer became an overnight sensation, with competitors quick to make their own DJI Spark alternatives.

But what does this groundbreaking drone actually bring to the table? Stay with us for a comprehensive and honest review of the DJI Spark. 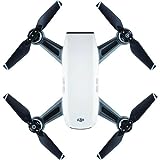 The DJI Spark packs a face detection function with it, making its operation more secure and personal. Simply hold the drone in front of your face, tap the power button twice, and watch as it goes and hovers in front of you. Functionality or party trick, it’s your choice (though we favour functionality).

Do mind the propellers and where you’re holding the DJI Spark when you use this feature though, as it might cause injury when you aren’t careful. We recommend installing the propeller guards, just in case.

The DJI Go 4 App is a handy extension and key to many of the DJI Spark’s features like its intelligent flight modes, but it also serves as a real-time repository of your captured stills and videos. You can even edit them on the go, and share them directly to your social media accounts.

This ups the ante in the unique drone’s marketability, as its main purpose is to take photos and videos, and the thought of having a reliable editing feature embedded into the app just makes the drone more appealing.

QuickShot is a collective shot template for your filming needs. It makes use of flight presets to create cinematic shots based on your desired effect. These presets are:

Rocket – The DJI Spark flies upward with the camera pointing downward, allowing for a progressively-widening cinematic shot of an area.

Dronie – Another cinematic preset, but this time, the drone flies upwards and backward, so the subject dwindles while the background increases in size.

Circle – This preset selects a subject and circles around it, for that perfect circular panning that’s hard to achieve when shooting on the ground.

Helix – A variation of the Circle preset, but the DJI Spark flies upward while circling the subject.

The intuitive TapFly function is also present on the DJI Spark, so you can plot where it goes on the DJI Go 4 app. You can either plot a specific spot to fly the craft to, or continuously control it with real-time taps to your desired location.

The DJI Spark’s deep learning tracking algorithm is impressive considering it can identify an object and adapt to its speed, for that consistent footage capture that would otherwise be sloppy without this sophisticated feature.

There’s nothing more satisfying than knowing you can control the DJI Spark without a remote (the basic package doesn’t ship with one), but how exactly? With smart gestures, of course! The embedded gesture identification software allows you to control the tiny craft with palm and hand movements.

From flight path, take off, and capturing pictures and videos, the DJI Spark can do it all by following your gestures and movements. Do note that this feature doesn’t work on longer distances, as this is meant for close-range stable video capture and shots only.

This is a combination of the craft’s vision positioning system, 3D sensing system, GPS/GLONASS, and IMU’s, keeping the drone aware of its relative position in the environment.

This means that the DJI Spark can avoid obstacles and collisions (though only for those that face its front-end), keep track of its location and avoid getting lost off-path, and be very stable when set to hover.

The 1480 mAh battery of the DJI Spark offers about 16 minutes of flight time, approximately. This is quite underwhelming when compared against other DJI drones, as this craft isn’t exactly a budget offering. However, 16 minutes is also plenty of time to capture a variety of amazing selfies in different locations throughout a day.

Do take the manufacturer-specified flight time with a grain of salt as it will depend on the speed and conditions you are flying the drone on.

You can charge the intelligent batteries with the dedicated charging cradle, or use the drone’s built-in micro USB port, which can be topped up with your power bank for maximum portability.

The DJI Spark sports a 12-MP 1/2.3 inch CMOS sensor that can capture photos at 3968×2976 resolution, and videos at 1080p FULL HD resolution, although video frame rates are limited to 30 fps. It has a wide-angle lens to fit a healthy amount of detail on your snaps. Clarity is also one of the strong points of this drone’s camera, which is amazing considering this is a “beginner-level” photography craft.

Stabilization is taken care by the 2-axis gimbal, ensuring that your shots and recordings aren’t shaky. An additional digital stabilization feature further steadies the DJI Spark’s captured videos, countering the effects of vibration from its motors and oncoming wind effectively.

The trade-off is this stabilization technique also limits the maximum resolution the DJI Spark can capture, consuming pixels by the edges and hindering the camera from capturing images and videos in 4k resolution. However, this feature is optional, so just bear it in mind.

Do note that if you purchase the DJI Spark by its lonesome, it does not ship with a remote controller, limiting the control capabilities down to your smartphone via the DJI Go 4 app. There is a slight bit of lag with the app at longer ranges compared to the dedicated controller.

The phone app also connects to the drone via a Wifi connection, limiting the range to about 100 meters. With the controller, the transmission range is extended to about 1.2 miles.

This extra range is slightly excessive feature though since the drone’s flight time limits its capabilities when covering so much ground — it would use around 5 of its 16-minute battery life travelling at its top speed to fly 1.2 miles away and back again — but we would recommend buying the drone with the controller due to the latency.

All that aside, the DJI Spark’s built-in smart features that can be accessed through the Go 4 app is nothing to scoff at.

A plethora of intuitive cinematic shot presets, gesture and face recognition, and obstacle detection are just some of the features that maximize the functionality of the fleet-footed drone.

The DJI Spark is a fun craft to fly and operate due to its novelty features, so don’t stress out on upgrading its range and capabilities with a pricey step-up program.

The DJI Spark adapts the standard quadcopter layout, but unlike its bigger brothers, it doesn’t feature foldable arms for portability. It doesn’t particularly need this feature though, as this petite DJI offering isn’t much bigger than a large smartphone or powerbank. Weighing in at just 300 grams, it’s easy to transport, but well-balanced once it takes to the skies.

Apart from its electronics and motors, it can be inferred that the DJI Spark is mostly built out of durable plastic. The body is crafted from a one-piece mold of the rugged material, making it more rigid in the event of crashes (which you shouldn’t really worry about during selfie sessions).

It’s fitting to call the DJI Spark cute, not just because of its size, but the color schemes it is offered in.

Available in bright red, blue, yellow, green, and a classic white colorway, you can never go wrong with aesthetics on this miniature drone.

Apart from taking away the intimidation factor of monotonous black/white/gray drones, it also helps in increasing the craft’s visibility while in flight.

From a leisure/novelty standpoint, the DJI Spark does well on its lonesome (without the dedicated controller).

The drone is very responsive with its gesture detection features, with the programmed gestures easy to replicate. This gives you control over the drone’s tracking function, taking videos and pictures, and even controlling its movement with a wave of your hand. While the DJI Spark isn’t exactly made of metal, feel free to dish out your best Magneto moves on this one.

For the enthusiast standpoint, however, you might be frustrated at the level of response you get without the controller, especially since the DJI Spark is capable of up to 31 mph. As far as precision is concerned, a physical controller will always net you better response times and accurate movements on the drone while operational. Longer distances (around 50 m) might mean the live feed getting cut out at times, or worse, losing instant control of the drone, making it more prone to crashes at this range.

This issue of proximity really boils down to the intended use of the DJI Spark, so we’ll leave the decision making to you.

After reading our DJI Spark review above, it is easy to see that the device isn’t perfect — but at this price, you’re not exactly expecting to use it to produce a Hollywood movie.

However, the drone is mainly offered for those who want to step their photo/video capture sessions — the primary reason being to capture amazing selfies. Tith that consideration, DJI has hit the nail on the head by making it ultra user-friendly and portable, taking technophobes to face their fears and ending the experience with a newfound appreciation.

The DJI Spark being just a ‘selfie’ drone is probably an understatement though, as it can provide stellar photos and videos worthy of a pro-tographer’s portfolio.

It’s a shame that DJI couldn’t go all out on the eccentric craft by providing it with its own remote controller, which solves all of its connectivity issues just like that.