While DJI has built up a reputation for themselves with their top-of-the-line enthusiast and professional drone offerings, the Chinese giant also cares about the lower end of the spectrum. Trumping the toy drone territory is the DJI Tello Iron Man, a variation of the original Tello drone that has a MARVEL-ous twist to it.

As the name suggests, DJI has released a visual overhaul for their Tello drone, taking inspiration from the superhero Iron Man.

DJI partnered up with drone startup Ryze to deliver the Tello back in 2018 and it seems that the partnership was successful considering the buzz this UAV made online. But aside from the new paint job and app UI overhaul for the DJI Tello Iron Man, what else does it have to offer to aspiring beginners? 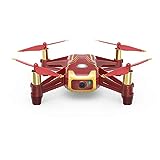 The DJI Tello Iron Man has the basics to make piloting enjoyable and easy to learn. The One Key Takeoff/Landing function has the drone automatically launch itself up in the air on the press of a button, hovering in place until you input your next command, or can make the drone stop on its tracks and slowly descend for a safe landing. This makes piloting the craft straightforward and seamless, meaning you won’t have to worry about how to maneuver it upon launch or retrieval.

The DJI Tello Iron Man has obstacle detection features under the hood for maximum safety during flight, though the sensors are dedicated at the front-end of the drone. It unfortunately doesn’t have adaptive features that automatically reroute the flight path when it encounters an obstacle. However, we think it’s mighty nice of the Tello to include at least a basic variation of this safety feature at an affordable price bracket.

Another takeoff option for the DJI Tello Iron Man is the Throw & Go function. You can grab the drone by hand (be careful not to let your fingers close to where the propellers are), activate the mode, and simply throw it up the air. It instantaneously regains composure and hovers in place after. Do note that as you activate the mode, the propellers immediately start spinning, so be careful when doing so.

What’s better than 3D Flips? 8D Flips of course! The DJI Tello Iron Man ups the ante with its party tricks. It uses your smartphone as a controller. With a quick streaking swipe across the screen, the DJI Tello Iron Man somersaults in the direction like an obedient dog-bird-circus freak hybrid.

The DJI Tello Iron Man is fully capable of taking a 360° panoramic shot with the 360 mode. It does this by hovering in place and rotating slowly, panning the scene with a stable and clear video capture.

This is a great cinematic shot preset that showcases the beauty of a true bird’s eye view. The DJI Tello Iron Man slowly rises in altitude while taking a video below, giving you a widening breadth and scope of the landscape while doing so.

This is the cheapo version of the point of interest mode found in more expensive drones. It does well without tracking software, though, rotating around a subject while taking a video of it. This is great for creative personal shots where you follow the drone’s perspective briefly for dramatic montage effect.

What has no elastic properties but can bounce? The DJI Tello Iron Man! This weird function has the drone “bouncing” up and down in the air, somewhere between 2 and 6 feet. We see no practical use in terms of filming or flight performance with this function, but what the heck, right? Party tricks aren’t unheard of in the drone community.

The DJI Tello Iron Man has a 1100 mAh battery that provides a 13-minute flight time at the best of days. This isn’t too bad considering the price point and the purpose of the drone, which is solely for leisure and introductory applications. It doesn’t hurt to purchase additional batteries as well, as the DJI battery packs are generally cheaper than those of competing drones in the market. Also, with a modularized design, you’re able to easily swap out batteries for a straightforward flight experience.

These batteries charge at around an hour and a half, which is modest considering the flight time it offers. It can be easily topped up with a USB charger for convenience.

The DJI Tello Iron Man is a 720p HD camera drone, which isn’t the most impressive of specs, but remember that this bird is no serious photography device. Still, 720p videos are nothing to scoff at, while photos are captured at a 5-MP, 2592×1936 max resolution. It doesn’t have that much in terms of field-of-view view, topping at 82.6º, but hey, better than nothing right?

Camera position is fixed, meaning you can’t do any perspective adjustments anytime soon, and there is no gimbal stabilization option, so if you want decently-stable footage, we advise that you let the DJI Tello Iron Man hover in place before taking a shot.

Image quality isn’t too bad as well, as sharpness is above average, giving you refined details even at a considerable distance, while color reproduction can vary according to lighting conditions.

The DJI Tello Iron Man doesn’t come with a dedicated remote controller, but bundles are being offered with an aftermarket controller included in it. You can control the drone via your phone through its smartphone app, though this can be a bit frustrating at times when your phone isn’t the beefiest in terms of specs, producing latency issues. Plus, nothing just beats the tactile feedback that a physical transmitter can give.

The physical controller uses the app as middleman platform for control signals to be transmitted. It has the same layout as a gaming console controller, so familiarization will be quite easy for beginners.

If you’re feeling a bit feisty, you can also control the DJI Tello Iron Man via the Scratch programming interface. This allows you to communicate with the drone via code, even giving you the freedom to do custom actions and flight presets.

Beware, though, as the inscription o’er the gates of coding hell reads, “Abandon all hope, ye who enter here”.

The DJI Tello Iron Man is a super-compact quadcopter that borrows some inspiration from its slightly bigger cousin, the Spark. Though there are no folding gimmicks here, the drone maintains a small footprint in all dimensions, especially in height. It completely forgoes the addition of landing gear, and instead has the rotor bases built longer to act as its feet.

Durability is decent as well, being built out of rugged plastic material and featuring propeller guards to lessen the risk of damage during a collision. All in all, the DJI Tello Iron Man is a well-built quadcopter in terms of structural integrity.

The appeal of the Iron Man color scheme is a make it or break it choice for those who aren’t actually fond of the superhero but, for us, it is implemented well. The matte red and glossy gold capture the essence of the Armored Avenger, even coming with a neat glowing Arc Reactor and a Stark Industries decal to boot. Judging from the accenting on the hull, it seems to have taken inspiration from the Mark 50, Tony Stark’s nanotech suit.

The DJI Tello Iron Man isn’t really meant to mimic the movie franchise’s suits in performance. It is limited to a 100-meter radius from the pilot, and tops at a speed of 28.8 kph. This doesn’t mean that the drone isn’t a performer though, as it responds seamlessly to your control inputs, no questions asked. A larger range would have been nice, though.

We advise that you fly the DJI Tello Iron Man in large indoor spaces or outdoor locations without a lot of wind activity, as the drone’s 80-gram weight will be facing adversity as soon as the wind picks up.

When talking about collisions, which isn’t highly impossible especially with beginners, the DJI Tello Iron Man has a neat fail-safe feature to protect its propellers and motors. The motors instantly cut out when propeller rotation is interrupted, preventing any further damage from occurring.

Though the DJI Tello Iron Man doesn’t have the latest and greatest in terms of specs and features, we gotta give credit to the level of functionality this budget-oriented drone has in store for you.

It’s easy to fly, has a decent camera, has a decent amount of juice (and even better if you can secure extra batteries for cheap), and an incredible price point to boot. The DJI Tello Iron Man is one of the entry-level offerings we wouldn’t want to keep away from you at all.

Furthermore, it has that MCU swag with it, even featuring design cues from the latest movie. So for big Tony Stark/Iron Man fans out there, you can live out your Avenger drone dreams with this hero-inspired quadcopter from DJI.