Holy Stone. A name so blessed indeed, that it decided to shower upon the world a good deal of modern drone technology — at prices that are seemingly too good to be true.

Known for pushing out drone models that scream bang-for-the-buck, what does the Holy Stone HS120D have in store for you?

While some of the big names in the drone space have spawned creations with virtually none of the compromise, the stinging price tag that comes with it usually deters the more budget-oriented consumer.

The HS120D is Holy Stone’s answer to its premium counterparts, but how good is it exactly? Find out in this Holy Stone HS120D review. 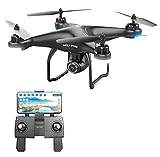 Almost every modern drone is equipped with a GPS/GLONASS system for stability when in flight, and the HS120D packs a reliable one to boot. This makes it stable mid-flight, which is even more notable when set to hover, achieving almost-perfect balance and is ideal for capturing stills.

Follow Me mode is a handy feature to have when you need to move around. Basically, the HS120D follows the controller signal, following you wherever you go automatically (as long as you’re holding the controller of course!).

Now, this is amazing.

TapFly is such a niche feature seen only in premium, professional-grade drones for the most part, but the HS120D packs it like a natural. TapFly allows you to draw a path on a map layout on your smartphone screen, and the HS120D will obediently fly in that direction, no questions asked.

This can be handy when you want to do a cinematic sweep of the surroundings, allowing you to focus on camera movement as the drone makes its way down the path.

Much like its smaller brothers, the HS120D has the One Key Takeoff/Landing feature. With a touch of a button, you can either take off or land without worrying about properly maneuvering the drone.

This is handy for the beginner trying to ease into learning the controls and is key in keeping the HS120D safe. We do not recommend relying on it too much though, as it is imperative to learn the proper maneuvers if you want to step up the drones you want to fly in the future.

Altitude Hold allows the pilot to keep the HS120D hovering in one position. This is useful for beginners who experience the nerves during flight, or when you want to take videos and selfies with it.

The Headless Mode is handy when you want the HS120D to fly along with the forward direction of the controller, regardless of its camera position. This lessens the chance of the drone going astray during manual maneuvers.

One of the more nifty upgrades modern drones have been popping up with is a dedicated Return To Home function, with the HS120D joining the party as well. It records the takeoff position of the drone, which it follows in the event of low battery levels, transmission loss, and other unavoidable errors.

The HS120D’s battery life is a bit more sustainable when compared to competitors in its price range. Its 1200 mAh LiPo battery provides power for approximately 18 minutes of flight time, though this may vary on the speed you are operating the drone on.

Average charging time for the HS120D’s battery is about 60 to 90 minutes, which is not that bad considering the time it can keep the craft aloft. Do note that no extra battery packs are included, and you may wish to purchase additional modules if you really need the juice.

The manufacturer also advises to let the HS120D rest for about ten minutes per flight if you plan to operate it for longer periods or need multiple instances in one sitting.

A step up from drones of this price range, the HS120D boasts a 1080p Full HD camera with a wide field of view, 120° to be exact. It can also be adjusted with its 75° vertical allowance, giving you the option to capture different perspectives with it.

You can use the Holy Drone smartphone app to access the FPV mode of the HS120D, giving you better control over the craft, especially on long-distance runs.

Taking stills, selfies, and videos has never been easier with the aforementioned Altitude Hold feature. Balance is one of the HS120D’s strong points, so you’re safe from the usual blurry captures common with its contemporaries.

Most of the HS120D’s smart and safety features comprise the difficulty level of flying it, which is generously low, making it a great drone for kids and adults alike. The controller module is super ergonomic, which folds when not in use.

The HS120D’s controller is strategically populated by the basic joystick layout, as well as the power and GPS button for easy access. On the edges are camera angle and drone speed controls, which are comfortably set by scroll wheel-type controls.

Vitals are taken care of the LED indicators on the controller, which flash and light up when something is activated or needs to be addressed (low battery level, for example).

The Holy Drone app is handy to activate the FPV mode of the drone, giving you fuller control once it takes to the skies. It also has the same button layout as the controller, allowing you to choose whichever mode of control is more convenient. You can even take off the limitations of the default Beginner mode via the app, setting new parameters based on your skill level.

The app also offers a map view, which is handy when synced with the GPS for a greater view of your flight path. More than that, the Holy Drone app keeps a log of flights and its corresponding data, so you can go full-geek mode on it.

Still sporting the classic quadcopter design, the HS120D has a considerably large footprint but keeps the weight low by way of its durable plastic build. Some of you may scoff at the mention of plastic, but the high-quality material used on the HS120D won’t disappoint in the event of crashes.

Do note that the HS120D doesn’t have the folding capabilities of pricier models, and doesn’t ship with a carrying case, so you might have to fashion one out for it. But as said earlier, the drone is relatively light, so you won’t have to worry about momentum-based injuries.

The HS120D has its camera attached to the belly, and is protected by the protruding landing gear around it. It also has LED indicators on every rotor arm for calibration and visibility purposes.

Holy Stone was generous enough to include two of everything of the most damage-prone components like the propellers, propeller shield, and landing gear.

The HS120D’s GPS-assisted performance (read: stability) really shines where it belongs: in the hands of a newbie. Packed with intuitive features and automated ones like the One Key Takeoff/Land function, this craft offers a guaranteed feeling of bliss for the neophyte pilot.

Its beginner mode is super helpful in easing the uninitiated into the drone’s controls. Once you’ve gotten the hang of it, you can disable the mode and set your flight parameters like speed and distance on the Holy Drone smartphone app, depending on your skill and confidence level.

Word of advice, though, don’t bite off more than you can chew.

More than beginners, the HS120D’s terribly well-balanced design gives it an edge over its competitors when it comes to photography and recording. Paired with its HD 1080p camera, your creative vision is the limit when shooting with the HS120D.

If you’re new to the drone space, it is by no means required to dish out tons of dough just to have a quality flying experience. There are plenty of amazing beginner-friendly drones and this is certainly one of them.

The Holy Stone HS120D is the materialization of that idea, giving you a plethora of useful features at a price that’s affordable for most people on a tight budget.

Build quality is outstanding, specs allocation is balanced, performance is smooth and responsive, recording quality is better than most models in this price range; it’s hard not to recommend the Holy Stone HS120D to a beginner.

Though it has its own shortcomings, most of it stems from the price bracket it fits in. And for that price, we think it has a lot to offer.