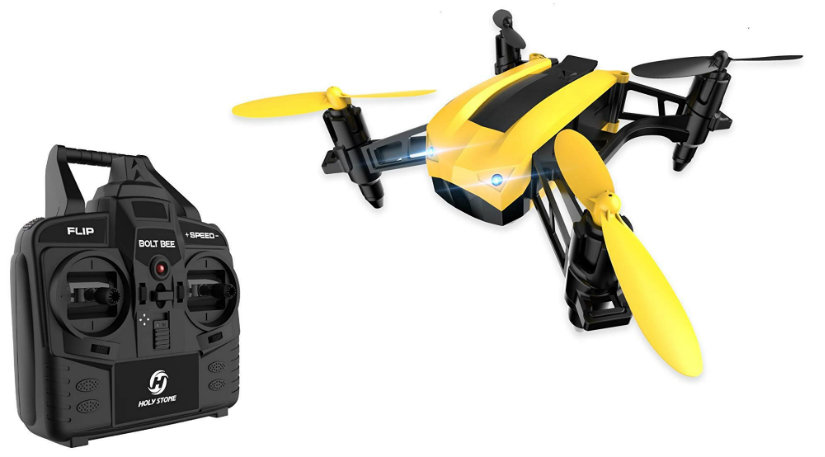 For a lot of drone enthusiasts and even beginners, anything under $100 is considered a toy grade offering.

These birds are meant to assist an amateur’s user experience, as evidenced by their safety functions and flight features. For that price, you’d get a decent craft from, say, Potensic or Snaptain, or even a different Holy Stone model.

But what if we cut our budget allocation down even further, shaving 50% off of our price benchmark?

You might dismiss the thought of a sub-$50 drone and get yourself a pair of new jeans or a fancy dinner at a downtown steakhouse with the money instead. But before you do so, we’re just laying it down that the Holy Stone HS150 RRP’s at just $45.99.

Marketed as a ‘mini racing drone’ by the brand, are you really able to do some rapid lap times with a precariously-priced drone such as this? Read on to find out in this comprehensive Holy Stone HS150 Bolt Bee review.

The Holy Stone HS150 features a Headless Mode function that gives it a straightforward control experience. While the drone isn’t necessarily marketed as a beginner’s drone, the price point is tempting enough to consider it as one, and having this feature is super handy. It basically ignores the drone’s front-end orientation and responds to the controller inputs as it is. If you push the directional lever left, the drone moves in the same direction regardless of whether the head of the drone is actually facing the same direction as you.

This is also beneficial as the Holy Stone HS150 was designed to be a racing drone. When you’re eager to edge out the competition, you don’t exactly have the luxury of time to assess the drone’s front-end orientation, right? Just flip the Headless Mode on, you’re off to the races in no time.

While the Holy Stone HS150 doesn’t have automatic takeoff and landing features like most entry-level drones, it does have one thing going for it in terms of emergency halts. The One Key Emergency Stop function abruptly halts any kind of flight operation, getting the Holy Stone HS150 into standstill mid-air, just like a braking function. This can be handy when you’re having too much fun and way less attention to how you’re flying the drone that its control gets out of hand unexpectedly.

3D flips give the Holy Stone HS150 a party trick to show off to your friends and family without the complications of doing a manual maneuver. Just activate the mode and proceed to flick the directional lever towards your desired roll direction, and the Holy Stone HS150 will immediately flip like an acrobat, safely stabilizing itself after the trick.

The Holy Stone HS150 has a 600 mAh battery giving it enough power to fly for about 7 minutes tops, and although we only managed to reach around 5 minutes during testing, we weren’t really expecting anything spectacular at this price point. Some of the best racing drones actually clock in around the 3-4 minute mark for flight time. Holy Stone gives you assurance with its bonus battery pack, doubling your flight time to a theoretical 14 minutes for a longer practice or racing experience.

Speaking of the battery packs, whilst they are modular, Holy Stone has to step up production methods as we encountered some fitting issues with it. The batteries, for us at least, were pretty difficult to change.

Charging the batteries can take up to about an hour and 30 minutes, which isn’t all that bad, but considering the flight time it offers the drone, you’re better off buying multiple packs so you won’t have to worry about replenishing the packs when you’re out on the open. It has an LED indicator that turns off when the battery is full, so you can proceed to switch to an uncharged pack.

Sadly, the Holy Stone HS150 doesn’t ship with a camera unit, which is totally understandable as the price point it comes at is already pushing it. You’d have to rely on your line of sight to operate the craft, which is fair enough considering its limited range, but it does hamper it when it comes to being a true racer.

Racing drones usually offer a camera with First-Person View functionality, giving you the ability to use a VR headset and race ‘from the cockpit’.

Even with its cheap price, the Bolt Bee delivers a professional-looking controller that doesn’t go with overt gimmicks in design, sporting an all-black color scheme and has the standard dual joystick layout, along with function buttons for the Headless mode and trimming functions.

The controller’s shoulders host the 3D flips toggle and the five-speed switch for your desired level.

The controller carries some heft to it, and is a handful to hold, making it comfortable to operate without really focusing on major ergonomics.

The Holy Stone HS150 is called the Bolt Bee for a reason, as its color scheme reminds us of the universal pollinator, as well as the sound it makes as it zips by (this drone is by no means silent!).

Built from some kind of plastic material, the drone isn’t really that flimsy when considering how cheap it retails for, which is a good thing since it doesn’t come with obstacle detection features, but it is likely to break somewhat easily — especially if using it in really hot weather.

The hull design isn’t the most aerodynamic around, but you know what they say about making the most of what you have.

The landing gear is integrated with the motor mounts, which is acceptable since it doesn’t need to secure any camera unit attached to the drone’s belly.

This drone has got to be one of the most lightweight units we’ve ever reviewed, clocking in at a crazy-light 68.9 grams. Be careful in breezy conditions as you might lose it forever — that’s not a joke.

The Holy Stone HS150 does admirably while in the air, holding its own against pricier counterparts in terms of responsiveness to your control inputs, which is taken care of by the 2.4 GHz signal transmission frequency.

We infer that Holy Stone once again skimped out on this feature as control over the drone is questionable once you’re 20 meters from the 50-70 meter range limit of the craft, cutting out at times or becoming spotty. You’re better off flying it around half of its range for maximum performance and safety.

In terms of speed, the Holy Stone HS150 shines with its impressive 50 kph max speed, which is probably why it was dubbed as a racing drone. You are given five speed options to choose from, with the max speed carrying the craft like a golden blur in the air.

The functional 6-axis gyroscope helps to keep it stable, handling most of its balancing functions. It has the power to cut through some light winds, but the weight (or lack thereof) of it means that anything more than a light breeze will likely be too strong. Our advice: fly this indoors.

While the Holy Stone HS150 is being touted as the cheapest racing drone around, it doesn’t really hold well to the “racing” aspect, with just its top speed going for it in the department.

That being said, the Holy Stone HS150 may be a viable beginner drone, if you’re fine with just three functional flight modes to show you the ropes of flying.

The Holy Stone HS150 is dirt-cheap, and could make a fun toy for a kid, but we’d recommend bumping your budget by a few more bucks to get a more reliable unit that has a few more features.

You know what they say: buy cheap, buy twice.