You can almost never go wrong with budget drones these days, as the numerous models being offered at almost every low price point can serve its purpose.

You can purchase any one of them and guarantee you’d have a flying piece of technology out of the box and they’re likely to have somewhat similar specs. That means it’s all about finding the value.

For somebody who doesn’t want to spend much but also doesn’t want to settle for toy-grade offerings, drones between the $100-200 bracket holds a lot of value already. The Hubsan H501SS X4 sits at the upper end of that price range, offering specs and features that should be expected with its cost.

What intrigued us the most, however, is that the H501SS X4’s remote controller comes with a functional FPV screen that you don’t see all too often — not even with pricier drones.

So, we just had to pick one up and try it out for ourselves.

Did it pass our tests?

Find out how the drone fares in this exhaustive Hubsan H501SS X4 review. 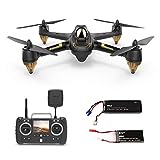 The Hubsan H501SS X4 carries a GPS module with it to make flight performance more stable, as well as make the assistive flight features functional. The drone connects to satellites in order to properly determine its position in real-time.

Hovering or going into an automated flight preset is also more stable, as the drone is able to correct its balance and positioning in accordance with real-time location updates.

Amateurs might find flying the Hubsan H501SS X4 — or any drone — daunting as you’d have to constantly keep track of its position relative to the 3D axis it bases its movement on. Worry not, as the drone has a Headless Mode that simplifies flight operation down to the very basics.

The mode has the drone “forget” its front-end position, and instead relies on the pilot’s front-end perspective to operate, meaning that any direction you push the control lever towards, the drone will execute. Headless Mode makes everything easier with regards to flying the drone.

In case of low battery levels, signal transmission loss, or other unforeseeable flight errors that might jeopardize the safety of the craft, the failsafe Return to Home measure immediately kicks in, returning the drone back to its initial take-off point.

You can also manually prompt Return To Home with the press of a button, in the case where you need to go hands-free to do something else while retrieving the drone, or if you’re plain lazy. Go figure.

Do note that this mode only works when the GPS module is connected to 6 satellites or more, so ensure that you have proper access to these signal monsters before taking off to the skies.

Using the signal of your transmitter, the drone will follow your every step with the Follow Me function. This can be handy when you want to film your solo adventures in a unique third-person perspective, forgoing selfie sticks or tripods altogether.

You can stay completely still in mid-air with the Altitude Hold feature, which lets it hover in place at a fixed height. This coveted stability gives you a steady shooting platform to capture videos and photos from, making it as effective as a tripod without the burdensome effort of setting it up, following your command with just the push of a button.

You can command the Hubsan H501SS X4 to do a complete 360° sweep of a subject with its Orbit mode. You just need to select a target subject, and the drone will automatically revolve around it while keeping the camera trained at the subject at all times.

This has the drone orbiting the subject like the moon of a celestial body, albeit at a fixed distance for consistent shot framing.

The Hubsan H501SS X4 has a beefy 2700 mAh LiPo battery that can supply the drone up to 20 minutes of flight time. This is rather impressive, considering that drones at its price bracket can offer only 3/4 of what this bird has in stamina.

Even the most expensive recreational drones ($1,000+) only max out at around 30 minutes.

Charging the batteries back to full can take about 2 and a half hours. While this might seem to be a bit lengthy, we really can’t complain given its premium flight time. If your flight laps are still choked by the flight juice, secure extra packs to extend your sessions by a significant margin.

The 1080p HD camera gives you some level of photography and still-capturing abilities. We’re saying “some”, as the optics unit doesn’t really give off an impressive recording and capturing result. Shots are quite grainy, especially on low-light conditions, and the level of detail that the lens captures does seem slightly subpar.

The unit is fixed onto the hull as well, unfortunately with no stabilization, so use Altitude Hold if you don’t need to do moving shots at all.

Well, if there’s any consolation here, you’re darned lucky to have a functional HD camera on a drone this price, as it still serves a purpose especially with the FPV feed it provides to your controller, which we will tackle in the next section.

We don’t know where we’d put the controller in terms of design and aesthetics, as it dons some of that retro RC look while having some modern implements and accents on it as well. It features the usual dual joysticks, dedicated function buttons, trimming buttons, and antennae which output separate signals for the FPV and control transmission.

The antennae details might seem irrelevant, but the majority of drones and controllers in this price range actually have fake antennas. We’ve no idea why, but it’s nice to see things included that are necessary.

What really got our attention is the LCD screen in the middle of the controller, which provides live telemetry data such as battery level, speed, distance, and an FPV feed, all rolled into one on-screen display. It measures 4.3 inches diagonally and crops down the video feed into 640 x 480 resolution — more than enough for what it’s used for.

This neat feature does away the need for a smartphone, allowing you to skip pairing processes altogether, which can be a hassle especially with drones in this price bracket.

The controller is fairly hefty, though, and needs to be outfitted with 8 AA batteries. Best to get some rechargeable ones.

The Hubsan H501SS X4 is a rather slim quadcopter, with slender arms supporting the motor hubs to the hull, and a sedan-shaped body to match.

While it does look light, the drone weighs in at about 410 grams, which is rather deceiving just by looking at it. The camera unit is integrated into the front of the hull, eliminating the need for longer landing legs under the belly, and are instead integrated as standoffs under the motor hubs.

Quality materials are used in the construction, as it can take some degree of abuse (hey, everybody has a crash from time to time) and still remain functional upon retrieval. It also has a premium aesthetic of sorts, with gold highlights for that posh vibe, allowing you to choose between a black or white color scheme. The gold accents match either finish quite nicely.

Before anything else, ensure that the Hubsan H501SS X4 is connected to at least 6 satellites before operating, as the default flight settings don’t allow the drone to fly if the number of satellites it is required to establish connections with isn’t fulfilled. There is a workaround for this in the settings, however, but just to stay on the safe side, work with Hubsan’s recommended safety settings until you’re skilled enough to bypass them.

In terms of control response and stability it doesn’t disappoint, being very obedient while mid-air and responds to your control inputs without fail. This can go on for at least 400 meters, though we advise not pushing your luck and stay somewhere near the 300-meter range. Winds do not affect the craft that much generally unlike drones of lighter builds, but be careful of rogue gusts nonetheless.

The Hubsan H501SS X4 isn’t the fastest of them all, even with its outfitted brushless motors. Nevertheless, it’s clear that this was never designed to be a racer.

The Hubsan H501SS X4 performed well to match our expectations, if not exceed them.

While not exactly the speed demon or the eagle-eyed marksman of the lot, this quadcopter is just the right mix of functionality, user-friendliness and positioning features that will surely be of gain if you’re looking for an affordable route into the drone world.

One major takeaway with the Hubsan H501SS X4’s overall design is its elimination of the need for smartphones to function fully, and instead integrates its features to the controller, even packing an LCD screen capable of supplying you a live feed of the drone’s eyes. Handy, if you ask us — which you did.

The Hubsan H501SS X4 clearly isn’t the alpha of the pack, but it surely ranks up high in the echelon, providing excellent functionality and convenience for less than $200.