While the content creation crown of drone brands has been with DJI for a long time now, the competition will always find a way to counteract their dominance in the scene. Surely enough, the brand has been supplying drone heads with some of the best UAVs money can buy, but that is if you have the money to buy.

This rather premium pricing standard set by this major player is one of the reasons why competitors scramble to get close to their offerings but with massive price cuts. It ain’t always rainbows and butterflies, however, as cost-cutting measures are surely implemented to bring these drones to the market.

It’d be tactless of us to call them knock-offs as well, as these UAVs usually hold up to there promised specs and performances. The Hubsan Zino Pro is one such bird, with its main selling point being the 4K camera for such an affordable drone. Wanna know how it actually performs? Stay with us for a thorough Hubsan Zino Pro review. 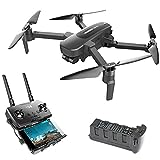 As with most mid and high-end drones in the market today, a GPS + GLONASS module is a must-have implementation. This allows the drone to pinpoint its exact location in real-time by connecting and communicating with overhead satellites for precise triangulation data.

More than that, this dual configuration ensures that should one of the systems fails, a point of redundancy takes over the entire positioning protocol, keeping your drone safe from harm at all times.

While the drone is primarily aimed at content creators on a budget, beginners can rejoice to know that it has a Headless mode built into it. This has the drone completely ignore its front-end configuration and instead relies on the pilot’s own North to navigate.

The drone responds to control inputs in a straightforward manner, regardless of where it is facing. This allows newbies to pilot the craft without having to constantly take note of the drone’s nose position.

Utilizing the drone’s GPS functionalities is the Return To Home Function. Basically, it records the drone’s initial takeoff point, which it accesses when it’s time to go home like the good bird it is. This is automatically prompted by low battery levels, signal transmission loss, or other flight errors that may occur.

You can even manually access it and have the drone hurtling back to you without the need to pilot it yourself. Talk about convenience.

Much like any other drone in this price range, this bird has its own version of a Follow Me function, and in this case, is called Image Tracking. Simply select your desired subject in the X-Hubsan app and the drone will start tracking it, maintaining a constant speed and distance to improve shot framing.

Line Fly Mode is more like a simplified waypoint function, which allows you to draw a line on the X-Hubsan app for the drone to follow. This makes shooting convenient as you can control camera movements and perspective while the drone takes care of its own movement.

The drone also has a full-fledged waypoint function if you intend to do multiple automated maneuvers in one pre-setting. Simply plot the points on the smartphone app and the drone will fly the course on its lonesome. This is ideal for better camera control, or just simply repositioning your piloting position without having to manually fly the drone yourself.

This has the drone encircling your chosen subject in a complete 360° sweep, with the camera trained at it for that cinematic capture perfect for montages. You can even adjust the speed and the distance of the drone from the subject for your desired shot.

The Hubsan Zino Pro has a 3000 mAh LiPo battery that supplies it with 23 minutes of flight time, though this will ultimately depend on the level of operation you are pushing the drone at. This amount of flight juice is already impressive considering that most mid-end models fall short of the supposed standard.

Do mind that the batteries take almost 3 hours to recharge, crippling you with this lengthy downtime if you plan to do extensive shoots. You can always purchase backup battery packs, however, extending your flight time without having to rely on single charges in between.

The Hubsan Zino Pro boasts a 1/3-inch 4K UHD camera capable of taking 4K footage at 30 fps with the option to downscale to 1080p 60 fps, or 8-MP photos. This is rather incredible for a drone of this price, as most premium drones that sport 4K optics run for almost a grand. There is no question about the clarity of your shots, with every tiny little detail popping out especially on the photos.

There are some downsides, however. The dynamic range sometimes interferes with lighting contrasts, and the settings available for tweaking only comprise exposure and ISO. But this is just us nitpicking, really. For a drone of this price to pack a 4K-capable camera that can deliver is nothing short of impressive.

Stability is taken care of the 3-axis mechanical gimbal, which even gives you rotational functionality for panoramas of 180° and 360° variations. It does work like magic, buffering vibrations from the motor as well as wind sway for that fluidity and steadiness in your shots.

It even sports a detachable lens cover if you want to outfit photography filters on the camera unit.

The Hubsan Zino Pro has an OEM remote rebranded for the specific use of the drone, as we have already encountered such a controller from brands like Potensic. We actually like the said design, however, as it goes for a rather minimalist build, not too bulky and over the top. This makes usage comfortable even at extended periods of piloting.

It has the usual dual joystick layout, with dedicated buttons populating the bottom of the controller, all clad in a classic black finish. It even has a phone rack at the bottom for your FPV and X-Hubsan app needs, although we think that a top-cradle design would be more optimal. Your phone also connects to the controller via a USB cable, so no need to worry about glitchy WiFi-based interfaces.

Here is another feature that most drones just can’t deliver at prices below $500: foldability. The Hubsan Zino Pro mimics one of the forefathers of folding drones: the Mavic. Pilots take portability for granted nowadays, but for content creators, having a shooting implement that you can safely stash away into a compact package is priceless. 10 points to Hubsan.

The drone feels premium as well, with the neat color scheme and high-density polycarbonate construction. This means that the build doesn’t go overboard with weight (although the drone does carry some heft to it at 710 grams) while staying relatively durable. As the UAV doesn’t have obstacle prevention measures, it’s better to be safe than sorry.

Its landing gear is integrated into the motor housing for that hassle-free design and also features LED lights for operational diagnosis, as well as added visibility during nighttime flight or low-light conditions.

As far as performance goes, the Hubsan Zino Pro is very responsive to control inputs. This makes capturing shots in the perfect moment possible, ensuring that flight performance is seamless and goes along with your planned shot composition.

Balance is taken care of the drone’s accelerometer and other positional sensors that work in conjunction with the GPS of the drone to counteract drifting and stabilize the craft while on the go. This aspect, aided by the weight of the drone, gives it a level 5 wind resistance rating, holding its own against rogue breezes and gales.

As for speed, it is taken care of by the drone’s brushless motors, which are leagues better than their brushed cousins. Brushless motors are more efficient, generate lesser heat and friction, and are virtually maintenance-free for the rest of their service lifespan. It tops out at 40 mph, which isn’t too shabby considering that most of your subjects aren’t going to be moving at these speeds.

The drone also has auxiliary vision landing technology, meaning that if the Return To Home functionality fails to initiate, the drone will find a safe spot to land on instead, making retrieval a fairly easy task.

For our content creator brethren on a budget, or just some chap who’s had it with cheaper drones and want to up the ante with a “premium” UAV, there is no shortage of choices available in the market.

But only a few of them actually practice what they preach. The Hubsan Zino Pro is a great example of these bang for the buck choices, with its excellent operability, intuitive features for beginners, that coveted portable design, and most of all, a full-fledged 4K camera.

Surely, there are more capable drones out there that outperform this bird, but for the price, this fleshed-out UAV is a no-brainer to get, especially if you’re a photographer who wants to expand their territory without breaking the bank.

This is probably one of the best steal deals for 4K drones around, so put the hesitation aside and do yourself a favor, will ya?