For those who are still on the hunt for a viable drone with the perfect balance of stats, specs, and features, the market offers a wide variety of aircrafts to choose from.

You could probably blindfold yourself and do an eeny-meeny miny-moe on an online catalog and end up with a fairly decent unit — most manufacturers are producing competitive drones. Still, it doesn’t hurt to be more careful and calculating, especially when you’re considering dropping around $200 for a bird like the Potensic D58.

The Potensic D58 is said to be the brand’s ace in their pack, featuring GPS capabilities, smart features, and commendable specs.

But is it worth your hard-earned dough? We dug right in and have a verdict. Sit tight for a comprehensive review of the Potensic D58. 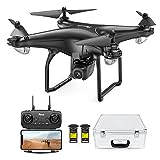 While it isn’t surprising that a drone the price of the Potensic D58 has GPS integrated within it, Potensic’s choice to go with the dual GPS and GLONASS combo means better location and positioning abilities for the drone, connecting to 24 orbiting satellites for a more precise readout on the smartphone. Not only does this help in making the GPS-assisted features functional, but it keeps the drone stable when hovering and lets it stay on the path when automated flight presets are active.

Also, the redundancy offered by the dual location and positioning system gives the drone a fighting chance if either of these modules fail, acting as a backup system that secures the craft while in-flight.

Just like any other mid-range modern drone, the Potensic D58 is equipped with a Return To Home function that can either be activated manually or automatically, depending on the situation.

Primarily, this is handy when the drone’s battery levels are dangerously low, signal transmission is lost or spotty, or some other error endangers the drone’s integrity. You can also manually recall the drone in the event of relocation, or if you’re just too lazy to fly it back towards your position.

The Potensic D58 does this by recording its initial takeoff point, and then backtracks to the location with the help of GPS to safely get back to you.

The Potensic D58 is aimed at beginners in the drone space — piloting professional UAVs can be tricky — and it provides some useful beginner-friendly features like One Key Takeoff and Landing.

This is helpful for amateurs who are trying to have an enjoyable experience and wouldn’t want to be burdened by unforeseen crashes when initializing or landing the drone. Or, for your lazy ass when you can’t be bothered with the task of take off or landing.

The Potensic D58 can fly at a pre-determined path thanks to its Waypoint functionality, which can be accessed on the smartphone app. You can set points on the map, to which the drone will follow at a set speed and altitude.

This is handy when wanting to adjust camera perspectives while in flight, or when you just want to go hands-free when changing shooting locations. Features like this are usually found in products a little more expensive than the D58, so it’s certainly a welcome addition.

Orbit mode is a cinematographic preset of the Potensic D58 that has the drone encircling your selected subject, panning in a circular motion and effectively orbiting it, giving you a 360° shot of the subject. This also makes use of its GPS to properly plot its path while recording, making it accurate when compared to a manual pan.

The Potensic D58 is also equipped with a Follow Me feature that you can use on your solo adventures to make your drone follow you automatically, giving you a hands-free shooting experience that has you in the frame while capturing the scenery beyond you as well. It follows the signal of the transmitter to track your location, keeping a constant distance and speed to keep on your tail while you enjoy the view that awaits you.

The Potensic D58 has an 1120 mAh battery that provides a flight time of 18 minutes, though this may vary depending on your flight settings and wind conditions.

For a drone of this price, 18 minutes is already impressive. Potensic even packs another battery module in the kit to extend your flying joys by twice the amount. For a truly lengthy flight experience, though, we’d recommend you snag a few battery packs, which are affordable and can be secured at online retailers.

The smartphone app also works in conjunction with the intelligent battery, in that it shows the actual battery level left on them.

The Potensic D58 has a 1080p HD camera, which is pretty common for drones of this price range. Whilst a 2K or 4K camera is obviously more impressive (and more expensive), you have to consider that the camera packed with this drone isn’t the typical run of the mill camera cheaper ones offer.

Clarity is top-notch with every shot, although a bit of vibrancy in color reproduction would be lovely. Photos and videos may suffer from low light conditions, so time your shots so you get the best possible available light on them.

The Potensic D58’s camera has a 120° wide-angle lens that allows you to capture more of nature’s scenery, though this can be adjusted to 90° if you don’t need the extra coverage. Speaking of 90°, the camera can be tilted with that much adjustment range, allowing you to change perspectives for more variety on your shots.

While it’s not much, the camera also has a 1-axis stabilization that takes care of shakiness brought on by flight, winds, or the drone’s motors itself. Still, some shuddering was noticeable during flight, which can probably be negated when you’re shooting whilst on hover.

The Potensic D58 has a minimalist controller that features a dual joystick layout, and a neat population of buttons lined perfectly for that classy vibe. While ergonomics are out of the question considering that the smartphone attaches below it via an adjustable rack, there are no proper handles to accommodate your hands. Still, we think that the lightweight profile and small footprint is a viable design implementation.

The Potensic D58 goes with a pretty standard quadcopter design, in a classy matte black paint job. While it may seem uncreative and a little ordinary on the eye, the drone does give off a premium feel. This matte finish also gets rid of that annoying glare when flying under sunlight, which could potentially affect your shots.

While we aren’t too sure of what kind of plastic the drone is constructed from, it looks and feels durable, and is a telltale sign that the craft has been designed with possible crashes and collisions in mind.

It has extra-long landing legs to protect the camera unit attached to the Potensic D58’s belly. This allows for more clearance and space between the optic and the ground. It also has LED units in each of its rotor arms for extra visibility during low-light or nighttime flight, pulsing in colors to easily identify it at longer ranges.

We have no major qualms with the Potensic D58’s performance as it is very responsive to your control inputs even when using it as a long range drone. The drone’s controller range is 500 meters, as well as the live FPV feed’s transmission range, courtesy of its 5GHz Wifi operational frequency.

Be mindful of where you’re flying the drone though, as signal-congested areas may limit your range to around a 100-meter deficit.

The Potensic D58 can zip at speeds of up to 50 kph, which is more than enough to keep up with its contemporaries. It can be modulated with a three-speed option, which you can adjust depending on your skill or confidence level. While this is impressive for something as affordable as the Potensic D58, its brushed motors are an obvious weakpoint in its build.

Brushed motors are usually less power efficient, produce more heat, and have a shorter service lifespan than their brushless counterparts.

While this isn’t really a major concern to be worrying about, especially as this drone has a great battery life, it’s an area that could have been improved. That said, it probably couldn’t be released at this price with all the other features it contains.

Given a plethora of choices around the $200 price bracket, you’d likely be left dazed and confused after searching through and comparing them all.

Luckily, we’ve found that the Potensic D58 is a pretty solid drone and offers some outstanding features, specs, and performance.

For the money, you get a responsive and agile craft that can deliver crisp and clear 1080p shots, while sporting an impressive flight time. Furthermore, its GPS capabilities are nothing to scoff at, giving you the precision and accuracy to make its assistive features functional and keeping the drone safe at all times.

Sure, there are other drones that offer the same or ties closely with the Potensic D58’s performance, but this drone has delivered consistent performance time and time again, leading us to vouch for it with no reservations. Beginners and enthusiasts alike will find the Potensic D58 a delight to fly and shoot with, weaving a fine line between user-friendliness and decent shooting and flight performance.