Toy-grade drones are a great platform to start yourself off in the modern bird craze. Cheap prices mean disposable products, right? Not necessarily.

The Potensic T18 may be a super affordable model — it’s a drone that costs less than $200 — but make no mistake, this packs smart features like GPS navigation and assisted flight functions, amongst other things.

This might come as a pleasant surprise for those who kept their expectations low, as those shopping for toy drones won’t anticipate what the Potensic T18 holds in its tiny package. This is partly due to the fact that several brands are now at a technological arms race on who can pack the most important features into reasonably priced UAVs.

But is this product worth the hype? We’ve managed to get a hold of it and compile this detailed Potensic T18 review. 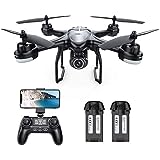 Much like other Potensic drones at this price range, the Potensic T18 comes with a dual positioning and location system, courtesy of a GPS + GLONASS implementation.

This ensures that the drone can accurately plot its location by communicating with 24 satellites orbiting the Earth. It also helps in making flight and hover modes completely stable, preventing it from drifting off-path.

The redundant design also helps in securing a fail-safe function should one of the systems fail in the middle of a flight.

Most of the Potensic T18’s intuitive features rely on the navigation system to function properly.

If you’re short on manpower and need to relocate or do some third-person perspective shots that focus on you as the subject, the Potensic T18’s Follow Me mode is the function you need. It follows the signal transmission on the controller to do so, however, which is a bit simpler when compared to AI tracking-based Follow Me functions of high-end drones.

The Potensic T18 can revolve around a certain subject while recording footage with its ‘Orbit’ mode.

The drone maintains a safe distance from the subject while making a full 360° sweep, giving you a cinematic shot preset that is super stable.

You can predetermine a route for the Potensic T18 to fly on with the Waypoint mode on the Potensic-G mobile app. This taps the GPS resource and brings up the map of your location, where you can set up points for the drone to fly through.

This can be handy in the event that you want to control the camera perspective without worrying about controlling the drone’s flight path — for example, you need your hands for something else.

Another important GPS-assisted function is Return To Home. This can be either automatic or prompted, depending on the scenario. It is activated automatically when the Potensic T18 detects low battery levels or transmission loss, or can be activated manually with a dedicated button in case you don’t want to maneuver the drone back to your location.

The Potensic T18 can hover in place when you use the Altitude Hold function, maintaining a stable location at a fixed height. This can be handy when you need to shoot videos or take photos that need to be super-stable — say goodbye to tripods.

The Potensic T18’s design is aimed at beginners trying to get into the hobby, thus a One Key Takeoff and Landing function was included with it. With a single button press, the drone can take off or land without your manual guidance, ridding beginners of the nerves that come with maneuvering them properly to avoid crashes.

Headless Mode takes all the complication out when controlling the drone, and instead provides a more straightforward way to maneuver it. It does this by neglecting the position of the nose/camera, and lets the drone respond to wherever you point the directional lever instead.

The Potensic-G app allows you to connect the Potensic T18’s live video feed on your smartphone for maximum control capabilities, and even record it while streaming. It also gives you access to some features like Waypoint, tweak flight settings, and record flight data in its log.

The Potensic T18 sports a 1000 mAh LiPo battery that provides ~10 minutes of advertised flight time, but in reality, expect this to be a couple of minutes lower, depending on the speed and wind conditions you are flying in.

In this price range, this short battery life isn’t something you should really be surprised by considering the loaded features of this sleek quadcopter.

Charge time is a bit lengthy though, which can range from an hour and a half to a dragging 3 hours. This is not impressive by any means, and we suggest getting extra battery packs, whether you are up for flying in extended periods of time or not.

The Potensic T18’s camera is capable of up to 1080p footage, albeit being capped at 30 fps for footage. It connects to your smartphone/controller combo via a Wifi signal, so expect a tiny degree of latency in some situations, especially in signal and interference-crowded areas.

The 120° wide-angle lens allows for better capture coverage, taking in a lot of background with each shot for a true aerial perspective. You can even adjust the camera up and down with a 90° tilt option to change focus positions and perspectives.

We have no complaints with regards to color quality and clarity; the Potensic T18 seems to hold up with its shots, especially for a 1080p-capable drone. We’re cutting it some slack as it is in the beginner drone territory, but we doubt other brands could do much better at the price.

The gaming controller design of the Potensic T18’s remote is a joy to hold since it feels familiar, even following the contours of the template down to a tee. This makes it comfortable to hold for long periods of time, though that might not be possible given the Potensic T18’s relatively short flight time.

Even the joysticks are at the same place as gaming controllers, with three main function buttons populating the bottom half (GPS lock, Power, One Key Takeoff/Landing).

The main face area of the controller is filled with LED indicators with corresponding labels and glow in primary colors to indicate speed modes, active flight features, and camera status.

Speaking of the camera, its tilt mode can be controlled with the top left-bottom left buttons, while video/photo capture and the Follow Me mode can be activated by the top right-bottom right buttons.

The controller gives you the ability to fly the Potensic T18 over a ~300-meter radius, giving it considerable range for you to practice or experiment on. It has a phone mount at the top as well, so you can use your smartphone as an FPV screen conveniently.

The Potensic T18 is on the smaller and lighter side of things, which isn’t a surprise since it slots right in with newbies who are afraid of piloting bigger craft — or simply don’t want to splash out the budget on something bigger right now. We get it, it’s totally understandable.

The quadcopter design of the drone is composed of durable plastic material, and it seems to be good enough for minor crashes and collisions, but do try your best not to.

Aesthetics-wise, you really can’t complain about the sleek quadcopter design of the Potensic T18. This is definitely one of the cooler looking UAVs in the budget price range — twisting popular traits with their own accents and proportions, making it an innovative step in the looks department.

Portability is also one of the strong points of the Potensic T18. It’s easy to carry during excursions and even comes in a rugged aluminum case to keep it safe during travels.

Potensic also packs the kit with extra propellers. propeller guards. landing gear, and a screwdriver for on-site repairs if ever needed.

The Potensic T18 offers three flight speeds to choose from. This lets beginner pilots ease into a comfortable speed level and control familiarity from the get-go.

Response on the Potensic T18 is top-notch, faultlessly responding to your every control input in real-time so you won’t have to worry about your drone going haywire as the range increases, which is considerable at about 300 meters.

It is stable as well, with the help of its 9-axis gyroscope that ensures proper balance and orientation even at high speeds. Just note that the lightweight craft might encounter stability problems during high winds, so choose your battles wisely.

This light drone is made even swifter with the implementation of brushless motors powering it in flight. These motors produce less friction, less heat, and have better power efficiency, giving it greater headroom when it comes to speed. It also ensures the lengthy lifespan of the motors, so you’re guaranteed to fly the Potensic T18 for years to come.

When you say toy drones, you immediately conjure images of cheap knockoffs that are good for a minute or so before crashing or become unusable at a certain range before plummeting to the ground at breakneck speed. Well, the Potensic T18 is none of those.

In fact, it packs a lot for something so small, whether it be 1080p camera or its useful GPS navigation.

Certainly on the more advanced side of toy drone territory, packing features that make it a lot more useful than just pure fun alone, the Potensic T18 is worth every penny.

It handles pretty well for its weight class, has a functional camera that captures legitimate photos and videos, and is easy to control, with the only drawback being its brief flight time.

All in all, we believe the Potensic T18 is an investment worth having. You can find it on Amazon here.