It’s a general rule of thumb to go affordable on your first drone, as it will take the brunt of your unpolished piloting before you master the art.

But even if you go cheap, there are options available that already pack user-friendly features and decent performance into one cohesive design.

The UDI U818A HD wants a piece of that beginner-appeal cake, with its dirt-cheap price being bundled with usable features, especially for the eager amateur.

Furthermore, it even gives you the ability to capture photos and videos with its 720p camera, which is a delight considering it now retails somewhere around the $60 mark.

But is this the right drone for our aspirant pilot buddies?

Let’s take a stroll down this bird’s capabilities and real-world performance in our thorough UDI U818A HD review. 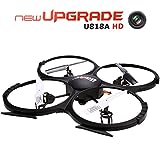 The UDI U818A HD is a beginner drone from the get-go, evidenced by the inclusion of a Headless Mode. The drone completely ignores its front-end, or “nose” orientation when you activate Headless Mode, giving you a more straightforward piloting experience, as you won’t have to constantly keep tabs of the drone’s 3D position in space.

Flying and maneuvering the drone becomes a seamless affair as your own front-end position dictates where the drone is headed, e.g. when you turn the directional lever to the left, the drone will follow suit and turn left, with every direction following suit, regardless of where the drone’s nose/camera unit is pointed.

Another handy feature to have on a drone, especially for total newbies, is a Return To Home mode, which gives the quadcopter a safety net to fall on in case of emergencies like low battery levels or spotty signal transmission.

The drone relies on the remote control’s signal to find it’s way back to you (the obvious lack of GPS being the reason for this), which is automatically prompted as soon as these aforementioned circumstances occur.

You can also manually activate this mode by pressing the dedicated button, recalling the drone at your discretion.

This is handy when you want to check the drone for faults, or if you are just too lazy to fly it back to your position (we’re betting on the latter).

For experienced fliers, this function is totally unnecessary, holding no true value in terms of bettering the drone’s flight performance, and often being a total waste of flight time.

But for beginners who want to show off some “sick” moves to their friends, the simple one-key 3D Flips function can be of use to some degree.

After activating the mode with the dedicated button, simply flip the directional lever to your desired position, and watch the drone do a 360° that way.

The 3D Flips function also gives us a good idea of how the drone implemented its design in terms of balance, which holds up quite well, as the drone reverts back to hovering position without so much of a wobble after performing the stunt.

The UDI U818A HD has a 500 mAh LiPo battery that provides it with 10 minutes of flight time at most. We weren’t expecting stellar flight times at this price bracket, but 10 minutes is a decent figure considering some drones in this price range run from 5-8 minutes on average.

The battery pack charges back to full at almost 2 hours worth of topping up with the included charger, which is a tad too long in our opinion considering the capacity it offers.

Luckily, the kit comes with 2 batteries, so you effectively have double the flight time — but with a half-time break. If you’re keen on flying for longer, secure more battery packs, which can be easily purchased online.

There is a low-ish quality optics unit that can take 720p video at 30 fps, and 2-MP stills at best. Not the hardest hitter in its weight class, but all is forgiven considering its price.

The camera is slightly angled down, giving you a typical birds-eye view of the situation.

As for capture quality, it gives the shot a weird, bright glow to it, especially with prominent primary and secondary colors. Furthermore, there seems to be a constant blurriness or haze with the shots, and we suspect this might be due to the plastic used on the lens construction.

During well-lit situations, videos and photos are okay-ish, with details popping out as they should, but even just with an overcast type of lighting, noise, and graininess start to take over the shots, smudging little details here and there.

You won’t find any stabilization support here as well, which the price should’ve told you long before diving in. Videos are shaky, especially when you try to record while in motion. The 30 frames per second cap doesn’t help as well, leading to a choppy viewing experience altogether.

That being said, maybe we’re just being too nitpicky with the UDI U818A HD’s camera, along with the fact that we’ve been stressing out to not expect too much with its performance. Functional? Yes. Viable for content creation? We don’t think so.

We have no qualms with the basic, likely OEM-rebranded controller, as it provides the basic functionalities while keeping the entire product cost low.

It has the usual dual joystick configuration, along with the dedicated function buttons that control the flight modes, photo and video capture, and 3D flips, among others. Situated by the bottom of the controller is a monochrome LCD screen that gives you basic telemetry stat readouts like battery level, speed, signal strength, and thrust level.

In terms of ergonomics and comfort, the transmitter weighs in at about 250 grams, making usage a balanced experience altogether.

It does not come with a built-in battery and relies on 4 x AA batteries to power it up. We’d suggest grabbing rechargeable ones to save on the long run of things.

Due to its position being a beginner’s drone, the U818A HD has already foreseen its grim lifespan, riddled by occasional meetings with the ground or any random obstacle.

It features the oven-burner design with propeller guards comprising most of the shape, hugging the propellers closer to the body, which contributes to the drone’s balanced build even further.

While the plastic construction of the drone is relatively thin, the body and parts are very elastic, which means they don’t break even after multiple impacts.

With crashes being mentioned, the U818A HD isn’t totally invincible, so the kit is bundled with extra props to get you up and running back in no time.

With regards to control, the drone responds well to your inputs without giving you a hard time, which is quite impressive as most drones in this price point are known to sometimes go a little haywire when talking about response level.

In terms of speed, the drone has two operational modes, corresponding to Slow and Fast performance.

For the first mode, speed is greatly crippled, as well as access to the maneuverability control. This is greatly useful for beginners who don’t want to end their career on the maiden voyage, but experienced flyers might find this a bit limiting.

The second mode lifts all performance restrictions, going all out on the speed and sensitivity settings, loosening up on the maneuverability of the craft.

There is a 6-axis gyroscope system, which increases the stability of the drone by a significant margin, while offering redundancy in terms of positioning sensors for maximum safety.

That being said, the second mode can still be too much to handle, so keep things at a conservative pace.

Entry-level drones, or more commonly referred to as toy drones, are slowly acquiring better specs and features from their counterparts from, say, two years ago.

The UDI U818A HD offers the basics in terms of usability and functionality for amateurs and even includes a bonus photography accessory.

While the quadcopter certainly needs polishing here and there (the camera leaves a lot to be desired), you really can’t expect perfection from a sub-$60 drone, right?

What we’re looking at instead is the UAV’s flight performance, and how consistent it delivers at multiple test flights. So far, this ticks out our checklist for the basics, including battery life, response level, and ease of use.

The UDI U818A HD holds up pretty well against its contemporaries in its price bracket, and we believe it’s a no-brainer choice to pick it up.