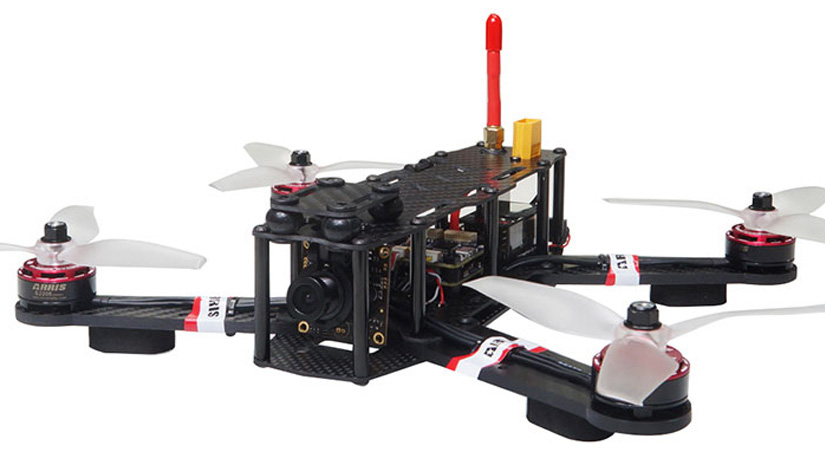 Getting your very own racing drone requires an extra amount of research, especially if you moved in from the casual toy-grade crafts or photography models territory.

We’ve been dishing out reviews for the latter type of drones over the recent months, but we will be touching on racing drones this time, just for our brethren who are interested in aerial racing.

At a glance, one can immediately notice the slight difference in spec allocations and features, as these drones are specialized for brutal, full-throttle performance, so expect less of camera pizzazz, aesthetic appeal, and training wheel features. Function over form all day, baby.

Racing drones have specialized flight controllers that set it apart from hobby-grade drones, which are often tuned out of the box according to a racing standard. The SPRacing F3 Flight controller is optimized to give this UAV excellent out of the box performance, albeit being damped by default to avoid unnecessary crashes.

That being said, pilots who have advanced experience at tuning drone settings at a hard-coded level can rejoice as this UAV can hook up to your computer via the CleanFlight software to allow you to customize and modify values according to your desired level of performance.

Since racing drones are designed to have an upgrade path, most of them are often shipped out with modular parts, especially the electronics and motors. This means that you’ll probably have to do a minor assembly job that’s a bit more complicated than the usual propeller or landing legs attachments.

One of the benefits of this modular design is you get to install components like the Raptor 390 Tower, which is an all-in-one PCB that tidies up your drone’s wiring configuration quite effectively, relying on solder points instead of messy wiring to ensure continuity on the craft’s internal circuitry.

The ARRIS X-Speed 250B V3 unit that we reviewed came with a 1500 mAh 4S battery, which gives the drone about 6-9 minutes of flight time but will ultimately depend on how aggressive you fly it. While this is rather underwhelming for those who are used to the lengthier flight times of hobby-grade models, it is expected as the high demand for power in these applications is unforgiving on your energy reserves.

This is due to the higher voltage that 4S batteries come at, topping the standard 3S battery packs by a 2-5 volt difference. This means that the battery can supply more current to the motors, which directly translates to better performance but a faster capacity depletion rate.

That being said, you can opt to buy extra battery packs that have a higher capacity to extend your flight time by several minutes. Also, note that the drone didn’t come with a charging unit, so take extra measures in ensuring that you include one before you check your cart out.

The ARRIS X-Speed 250B V3 has a 700 TVL HD camera that powers its live FPV feed quite adequately. 700 TVL is an analog standard that literally means “television lines”, as opposed to the digital standard of resolution and pixels. The pixel count equivalent of 700 TVL is 976 x 582, which is just a little over the measly 480p found in entry-level drones.

While you might say that you aren’t getting what you pay for with this setup, as most hobby drones at the $300 mark often sport 1080p to 2K cameras, remember that these UAVs aren’t directed at content creators. The manufacturer has to cut costs somewhere, and 700 TVL works just fine for this application. Real-time brightness adjustment also helps in effectively piloting the craft at high speeds.

The camera can also tilt upward, with leeway for up to 20° degrees of movement if you need the versatility, but we honestly have no use for this level of movement. It is stabilized by dampening balls, but the quality of these balls only offers a limited vibration reduction at best.

The ARRIS X-Speed 250B V3 unit we had comes with a Radiolink AT9S Radio transmitter. Set as a controller unit, although some kits do not come with remotes for your convenience if you want to go with another control unit. It is loaded to the gills with buttons, switches, and sliders, giving you the freedom to customize the controls.

It gives the drone about 1.5 km in range, with a lot of channel options for you to utilize. It even has a handy vibration alarm that goes off when your battery is low on juice or nearing the range limit. You can even customize the alarm threshold of the drone to give you more leeway or maximize the battery life, whichever is your choice.

The Radiolink AT9S carries some heft with it as it is powered by 8 AA batteries, but ergonomics and comfort are still at manageable levels. You aren’t bound to fly the drone for extended periods of time, anyways.

The ARRIS X-Speed 250B V3 is a robustly-built quadcopter, with a frame that’s made out of pure carbon fiber, at 1.5mm thickness. This makes it superiorly lighter than those drones with frames made from fiberglass or aluminum, without losing the rigidity it offers. This makes the UAV highly resistant to crashes, which are bound to happen one way or another in a racing setting.

Its motor arms are double-ply as well, as these are the most prone to breakage in high-speed crashes. Even the propellers are made from a mix of nylon and carbon fiber material, making them extra-durable when compared to props made from pure plastic.

The onboard flight controller sits on the vibration balls/dampeners as well but unlike that of the one that the camera is mounted on, it has some degree of play with it especially when the drone banks left or right. This instability may affect the accelerometer unit, which requires it to be flat at all times.

Just like we mentioned earlier, the wiring configuration of the drone is kept at a bare minimum, with the leads neatly tucked in channels and heat shrink, while most of the connections are taken care of a PCB unit for simplicity and cohesiveness.

As expected from a racing drone, the ARRIS X-Speed 250B V3 boasts cat-like maneuvers thanks to its amazing response time, translating your controller inputs into real-time movements instantaneously.

The drone is lightning quick as well, topping out at 80 kph on the stock S2205 brushless motors, although this can be bumped up if you opt to upgrade to a better set of motors, giving it an edge over some of the most competitive racers around.

Stability is top-notch as well, although we’d still be wary of the issues that might arise with the aforementioned accelerometer wiggle that may impact your handling. You can also tune the drone according to your specific needs as it is somewhat limited in terms of maneuverability and speed out of the box.

Racing drones are an exciting territory to explore, and much more if you know what you’re looking for. More than the thrill of the sport, these UAVs offer a level of customization which is vastly different from those of hobby-grade drones.

This particular bird has the essentials down to a tee, from build quality, spec allocation, and usability. While it does have some “shortcomings” in terms of flight time, camera capability, and design choices, none of it really holds a significant impact on the drone’s overall performance.

If you’re a first-timer in the drone racing scene, hooking yourself up with the ARRIS X-Speed 250B V3 is a sane choice to go with. Flexibility in the air, a high level of control and response, and just pure, raw speed in the skies, you’re bound to end up at the top with this bird.