Let’s guess, you’re here for drone shopping duties. Doing your research is half the battle they say, and it isn’t any different when it comes to UAVs, especially with the plethora of low quality affordable options plaguing the market right now.

Affordable, yes, but not every drone can deliver what is needed of them.

For this particular read, we’re pushing the limits as to what you can snag on a limited budget, specifically in the less than $200 bracket.

The Altair Aerial Falcon belongs in this category. Advertised as a beginner quadcopter that has intuitive and assistive flight features, along with a capable camera, amateurs might be tempted to click that checkout button on a whim.

But you know better than that. You being here and reading this is proof of that.

Let’s dive in and get to know this bird up close and personal in this extensive Altair Aerial Falcon review, shall we? 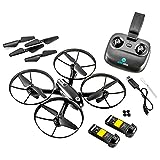 This budget UAV has an Autonomous Hovering and Positioning (AHS) system that takes care of its stability. While this isn’t close to being as effective as GPS, the AHS makes use of the system’s sensors to automatically reposition itself in the air, effectively hovering in place in the process.

The drone has this continually switched on while in the air, safeguarding your craft from potential crashes or accidents.

It works by giving the system control of the craft once the pilot goes idle on the remote controller, automatically setting itself in hover mode when no commands are given. This can greatly benefit newbies to take some of the nerves off, as any potential accident can be avoided by simply taking your hands off the controls.

Another beginner-friendly feature of the drone is its inclusion of a ‘One Key’ take-off and landing feature. Most newbies crash their drones on the maiden flight due to overeagerness, skipping manuals and the necessary documentation to properly fly them.

This function is a fool-proof way to introduce drone flight to these enthusiastic flyers, providing a dedicated button to initialize or retrieve the drone. Now you can enjoy flying the drone without worrying about wreckage early in its lifespan.

It doesn’t get any more awesome than this. Most people have taken Headless Mode for granted, forgetting that the feature is sometimes excluded in budget options.

Headless Mode disregards the current front-end orientation of the drone, which is where the camera is pointed, meaning whichever direction the pilot is facing will become the default 12 o-clock of the craft. No need to memorize 3D axis positions and whatnot. Nifty, right?

The UAV will respond to your control inputs in a straightforward fashion, which is handy for simplifying its flight operation, as well as being a useful tool when flying at distances where it’d be hard to discern which way the drone’s front-end is facing.

You can even automatically follow a specified flight path with the Custom Flight Routing option. Simply bring up the menu on the smartphone app, plot the points where you want the drone to fly on, and let the magic happen. It doesn’t get easier than that to go hands-free in seconds.

Whilst it doesn’t have a Follow Me mode, this is definitely the next best thing (although both is even better).

The Altair Aerial Falcon has a 1000 mAh battery that provides it with up to 10 minutes of time in the air.

Altair Aerial makes up for this by including an additional battery in the kit, effectively doubling your flight time for a more enjoyable learning experience. We know how it feels when your fun is cut short, so kudos to the company for this freebie.

You’ll want to consider stocking up on more battery packs if you plan on flying the drone for extended periods of time though, as charging each of them can eat up 2 to 3 hours of time.

The Altair Aerial Falcon has a 720p HD camera that has a 120° FOV wide-angle lens for photo and video capturing purposes. While some drones in this price bracket offer 1080p capabilities, 720p ain’t half bad especially when you consider everything else you get with it.

It still takes decent photos and videos, albeit with a lesser degree of detail when compared to its higher-resolution cousins. Don’t let this discourage you from getting the drone though, as this can be a starter platform to practice your aerial photography skills without breaking the bank.

You also get access to the drone’s FPV feature, giving you an easier (and more enjoyable) time navigating the skies with the help of the camera’s forward vision.

The Altair Aerial Falcon’s controller strays away from the gimmicky-looking remotes of late and instead opts for a simple rectangular block of soap aesthetic. Not to rub you the wrong way though, literally, as this design is totally comfortable when held for longer durations.

It still features the usual set of controls, including the dual joysticks, and dedicated function buttons neatly allocated along the dimensions of the controller. It also has antennae and a phone mount for a more comfortable FPV experience.

Altair Aerial even provides you with a cardboard cutout of the control’s template, complete with labels and descriptions for you to take in.

The Altair Aerial Falcon goes for the sleek quadcopter build with standard propeller guards. You can opt to remove them with a minimal disassembly process as well if you really aren’t too keen on the look.

We appreciate how the drone is solidly built though, contrary to what most people would get at this price point. It certainly isn’t flimsy, as the rugged shell and parts can take a beating or two, making it a truly beginner-friendly craft.

Performance-wise, this budget drone is a competitive bugger.

Response levels are commendable, translating your control inputs into instantaneous movements with real-time accuracy, although you are limited to a very small 100-meter range.

This is more than enough for practice flights, as boxing you in an enclosed area gives you better vision and control over the drone. It does limit the type of recording you can do with it, though.

The three speed modes give you the flexibility to choose between the level of control and maneuverability, where the drone is set to the lowest setting by default for better accessibility to beginners. You can eventually tweak it to the higher levels once you get a hold of the controls for a greater degree of freedom when flying.

All in all, the Altair Aerial Falcon impressed us with the level of craftsmanship and the thought behind the design. While the drone’s outward appearance may be generic for some, it packs some of the essentials that many manufacturers miss in this price range.

What we really like about this drone is the generous helping of assistive flight features and safety functions, making it a champion of the newbie masses.

It’s rare to come across a brand that doesn’t pull punches in giving the customer a well-deserved flying experience, as first impressions do last.

If you’re looking to settle for a functional UAV without breaking the bank, getting this quadcopter is a no-brainer, really. Value for money and outstanding performance when placed side by side with its similarly-priced contemporaries.