Potensic is one of the big players in the budget drone market, giving more notable brands a run for their money by pushing out top of the line crafts without the obnoxious markups.

The Potensic D85 plants its position well into the sub-$300 bracket, offering the most sought-out specs and intuitive features at a budget-friendly price. 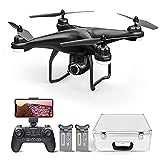 GPS capabilities aren’t unheard of in today’s drone offerings, and the Potensic D85 is no exception to the rule. In fact, the D85 is arguably one of the best GPS drones in this price bracket.

The dual GPS/GLONASS combination allows the drone to pinpoint its exact location by communicating with at least 24 satellites orbiting the Earth, making positioning super-accurate. This redundant system also serves as a self-backup fail-safe feature in the event where one system should malfunction.

This also helps the craft stay put in hover mode, giving you the option to shoot stable videos without the need for bulky tripods or gimbals. Your drone will also stay on its flight path faithfully, eliminating the risk of drifting off which is common on drones with no GPS features.

Modern drones should seriously consider including this feature, especially with the most budget-oriented models. Headless Mode takes the headaches away for beginners by completely bypassing its camera/front-end position, allowing you to control it without worrying about the direction it is facing.

Another key beginner feature is the Potensic D85’s dedicated One Key Takeoff/Landing function, where the drone automatically takes off or lands itself when commanded to. Shake off your nervous worries when trying to initiate or land the drone, as you won’t have to worry about maneuvering it to do so.

Altitude Hold is another nifty feature that you can take advantage of when you want to do wide landscape shots or selfies without worrying about controlling the drone. The Potensic D85 automatically hovers in place at a set altitude, giving you a stable platform for your shooting purposes.

Return To Home should be mandatory with drones in this price range, and it’s wise on Potensic’s part to include it with the D85. In the event of a low battery, transmission loss, or other unexpected errors, the Potensic D85 returns to its recorded takeoff point automatically. You can also prompt this with a dedicated button if you’re too lazy to fly it back to your position.

Much like the TapFly feature of DJI’s drones, the Potensic D85 has its own Draw A Route function to set waypoints on the map of the smartphone app for the drone to follow. This allows you to go hands-free when you want to film a scenery, or change piloting positions while covering ground.

The Potensic D85 also has a Follow Me mode that tracks the object then proceeds to follow it without losing it in the frame. The drone matches the speed of the subject to provide a consistent shot throughout the duration.

The Potensic D85’s 2800 mAh offers you 20 minutes of flight time, which is decent considering its price. Always bear in mind though that battery life is dependent on your operating and flying conditions, such as drone speed and wind levels.

If you feel the need to fly the drone for longer periods, the battery’s modularized design allows you to replace it with spares, if you ever consider buying some. This makes the process more convenient as you won’t have to wait for another charging cycle to complete before being able to fly again.

The Potensic D85 ships with its own branded action camera, which is a welcome sight. It supports 1080p video at 30 FPS and good quality picture shots. While 2K (or even 4K) footage might’ve been a more attractive proposition, the drone’s included camera can take clear videos and pictures and has a large area of coverage due to its 130° wide-angle lens.

One takeaway from this camera feature is the ability to outfit the Potensic D85 with similarly-sized action cams like the famous GoPro, so you can bump up the supported resolution up to 4K.

Unfortunately, the camera position is fixed and no stabilization options are offered, so you won’t be able to change perspectives on the go. The craft is stable while hovering though, so you might want to explore that option when taking videos.

The Potensic D85’s controller is simple by design, but ergonomic all around. You can easily grip the remote without experiencing hand pains or numbness, which is further enhanced by the basic layout which has the control distances optimized for maximum comfort. It features the dual joysticks on either side, with buttons scattered strategically around the face of the controller.

We wish Potensic populated the sides of the controller though, as reaching for the upper row of function buttons might prove awkward for those with smaller hands.

The live FPV feed connects to your phone via a 5G Wifi connection, giving you an amazing video transmission range of almost 800 meters, while the remote control range shoots up to 1500 meters. This means better visibility while flying the drone at long distances considering it is also compatible with VR headsets, giving you that fully-immersive flight experience.

The gorgeous quadcopter that is the Potensic D85 has a sleek, futuristic aesthetic that is dependent on its lines and contours to bring out its sci-fi mojo, which it does effortlessly. Most of its parts, including the hull, are crafted out from the rugged ABS plastic, making it impact and heat-resistant so you won’t have to worry about the drone taking damage when you accidentally fumble on the controls, or when flying around during hot days.

The Potensic D85 weighs in at around 525 grams, and while the drone isn’t really something you’d consider heavy, most FAA regulations require you to register crafts of 250 grams above, so keep in check with your local flight authorities for clarifications.

The drone has extra-long landing gear for legs, providing ample clearance for landing the drone, and does well in protecting the rather bulky action camera unit, which hangs directly under the nose of the Potensic D85.

Performance-wise, we really couldn’t complain about the Potensic D85.

The Sky Spider (as it packs an uncanny arachnid resemblance) is a swift flier, reaching speeds of up to 50km/h effortlessly. It’s amazing how it can carry its weight nimbly without thrashing from the inertia it packs, which brings us to another point: its braking system is top-notch bringing the drone to an accurate halt when you command it to.

Of course, all of this is made possible through the 1500 Kv brushless motors on each of the Potensic D85’s legs. Brushless motors are frictionless due to lesser parts making contact, allowing for more efficient power consumption, longer lifespan, and overall better performance over their brushed counterparts.

Another beginner-friendly drone has passed our standards, with the Potensic D85 scoring admirably in terms of design, performance, feature allocation, and control response.

Sure, it’s far from perfect — the perfect drone would cost thousands of dollars at a minimum — but the drone hits the sweet spot in terms of price to performance with its agile flight capabilities, decent battery life, and no-nonsense assistive features.

What we love the most about this design is the modular camera implementation. While it uses the bulky action camera layout, you get the versatility of outfitting your drone with cameras like GoPro, which has been all the rave of adventure-seekers, allowing you to bump up the supported resolution and recording clarity as you wish. Make no mistake, though, as the Potensic OEM camera shipped with the craft can go toe-to-toe with other 1080p-capable drones.

We just think that the option of upgrading with this platform in terms of optics gives a lot of freedom for those who take filmmaking and content creation more seriously.