In today’s episode of I Want a Drone, Not A Loan, we’re going to help you find the perfect quadcopter for you, with great specs and features but without a super high price premium.

Kidding aside though, who doesn’t want a low-budget option without sacrificing the drone’s quality and performance? The online market abounds with these so-called “top picks”, but are they really anything special?

Meet the le-idea IDEA20, a contender in the awkward price zone between entry-level and midrange.

It boasts a dual GPS implementation, up to 17 minutes of flight time, and a 4K camera. But before you scramble to find out if stock is available, let us take for a moment to ponder. That supposed 4K camera already has our eyebrows raised.

Are these specs just impressive on paper, or does it really deliver the goods?

What does this drone really offer? We got hands on to find out.

Read on in this extensive le-idea IDEA20 review to see our honest thoughts. 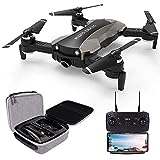 The le-idea IDEA20 has a dual positioning and location system with the GPS and GLONASS modules in it. This allows the drone to pull up real-time data to properly triangulate its location on the map, giving it extra stability when hovering or in flight.

Furthermore, flight safety is increased as these systems serve as backups for either in the event that one of them should fail. This secures the safety of the le-idea IDEA20 while mid-flight.

The le-idea IDEA20 comes with a Headless Mode function, which is a big bonus for beginners wanting to have a try at the drone. Headless mode completely bypasses the front-end orientation of the drone (hence the name) and instead relies on the pilot’s actual frontal direction to be the basis of its flight path.

This means that a left toggle on the directional lever will have the drone turning left, right means right, and so on, and so forth. While this might not make much sense on paper, the actual flight will be more of a straightforward affair, forgoing the need in keeping tabs of the drone’s 3D positioning.

One Key Takeoff and Landing

Another user-friendly feature for amateurs and lazy pilots alike is the One Key Takeoff and Landing function. With the press of a button, the le-idea IDEA20 automatically initializes for takeoff, hovering in place until the next command is issued. The same happens for landing, where the drone will stop in its current position and slowly descend for a safe landing maneuver.

This greatly minimizes the risk for human error which comprises a greater percentage of crashes at the drone’s startup.

Return to Home is a safety feature that secures the drone in the event of low battery levels, signal transmission loss, and other unavoidable flight errors that might endanger the drone. It is automatically activated upon detection of operational discrepancies or can be manually triggered when desired.

The le-idea IDEA20’s Return to Home mode performed rather poorly, much to our disappointment, however. It wasn’t the most accurate and suffered from a couple of mishaps.

We’d recommend keeping your flight area clear of obstacles and the flight radius at a minimum to make retrieval easier.

The le-idea IDEA20 also has a Follow Me feature that has the drone tagging behind your tail, following the controller’s transmission signal to function properly. You can record videos this way, which can be handy when you’re traveling solo and want to capture cinematic footage without leaving you out of the frame.

Do note that the le-idea IDEA20 isn’t always consistent in terms of its following speed and distance, so if you’re planning to ride a truck or car with the Follow Me mode activated, ensure that the speed is enough for the drone to catch up, as doing otherwise might risk the drone from being cut off or getting lost.

The le-idea IDEA20 gives you a stable shooting platform to record videos or capture photos with its Altitude Hold function. It automatically hovers at a prescribed height and is assisted by the GPS module to maintain stable flight performance.

The Circle Fly option is really just an Orbit feature that a number of drones with GPS and Follow Me offer. Labels aside, Circle Fly allows you to choose a subject via the smartphone app, which then commences a full 360° maneuver while recording video for that cinematic swoop of your subject.

The le-idea IDEA20 has a 1200 mAh battery that provides up to 17 minutes of flight time, though this varied during actual testing, actually hitting somewhere in the 14-minute mark. While the advertised flight time is a bit exaggerated, 14 minutes isn’t all too bad considering the battery’s lower capacity.

Charging time can reach up to 4 hours, though, which has a vast disparity when compared to the flight time it provides. le-idea doesn’t provide an extra battery pack in the kit as well, leaving you off to source your own drone batteries.

Diving deep into the camera capabilities, its advertised “4K” optical system isn’t really true 4K, for video capture, at least. While picture resolutions remain true as advertised, the video capturing-ability of the camera relies on interpolation techniques to get to that upscaled pseudo-4K resolution. This means that the camera fills in missing pixels to complete the shot, although compromising the finer details upon closer inspection.

It does have a true 1080p HD resolution though, which isn’t all that bad except for the fact that we’ve been duped with misinformation. To be fair, we sniffed the suspicion for a mile away. Still, the IDEA20 is a capable drone that can take quality stills and footages, albeit at a lower resolution scale.

If it’s any consolation, the camera has a 1-axis stabilization gimbal and about 90° of adjustment space to change viewing perspectives mid-flight. A little shakey, but better than no gimbal.

The le-idea IDEA20 has a rather simplistic controller that has all the controls rather confined to its limited space. The usual dual joysticks are present, while a total of seven dedicated function buttons occupy the rest of the space. Ergonomics isn’t an issue with its small footprint, but aesthetics-wise, its cheap glossy plastic construction (fingerprint magnet!) leaves a lot to be desired.

Smartphones attach to the bottom of the controller rather than the top, which is occupied by two antennae. Speaking of which, these are just dummy horns that have no actual lead wires that run their length. This is another case. This is often seen in cheaper drones, and no we don’t know why either.

Also, bear in mind that the controller has no built-in batteries, and instead accepts 4 AA batteries to power it up, so make sure to snag rechargeable ones to save money in the long run.

The IDEA20 adapts the standard quadcopter design, albeit is a bit chunky in the looks department, relying on its contours for that futuristic vibe. The drone is incredibly rugged, though, as it withstood crashes (we’re looking at you, Return To Home) with every hull piece intact, only damaging the propellers in the process. This is good news, at the very least.

Furthermore, you can fold the drone for extra-portability, given its lightweight profile as well. Transporting the drone is hassle-free, but we’d recommend you get a dedicated drone bag as its carrying case is rather flimsy, with no foam protection inside whatsoever.

LED units are located at the base of each motor housing, providing diagnostics when pairing and calibrating, while also giving visibility in low-light or nighttime flight. The landing gear of this UAV is integrated with the motor housing as well, giving it a low, sprawling stance when grounded.

First off, we really disliked how the le-idea IDEA20 implemented its calibration process. You are also required to pair the drone to the controller every time you want to fly it, which isn’t helping its case, to be honest.

In flight, though, it’s fairly responsive to your control inputs, translating every command in real-time and with commendable accuracy. Furthermore, 3 speed modes allow you to choose the drone’s speed and sensitivity level depending on your piloting skills or confidence. Stability isn’t an issue as well, which was consistent all throughout the testing duration.

Flight range is capped at 300 meters, which isn’t much, but recreational flyers rarely need more than this anyway.

Man, a little bit of a bummer.

What we thought was another budget king turned out to be a small disappointment.

To be fair, we’re more disappointed by the slightly misleading camera specs, moreso than its design or performance. The drone itself definitely isn’t a total loss. It still gives you decent flight juice, commendable performance, and reasonable image quality.

There are some better alternatives out there, though. We’d recommend the le-idea IDEA20 out of respect of its affordability — it’s certainly one of the better drones under $200, but perhaps would have benefitted from dropping some of its features in exchange for making the others better.