While DJI still has the majority of the market share in the drone space, its premium products fetch for equally-premium prices. This became an opportunity that competitors, especially those with small reputations, began to capitalize on.

Thus came the Ruko F11 Pro, a drone curiously priced in the middle of the recreational drone spectrum, but packs specs that left us dumbfounded — our jaws had a friendly meeting with the floor after reading them.

After recomposing ourselves and picking up our mandibles, we set out to determine whether the drone’s 2.7K ultra HD camera, 25 minutes of flight time, plethora of user-friendly features, and looks that could go toe to toe with the top models were just ‘paper specs’, or whether it actually stood up to real world testing.

Now we have your attention.

Grab onto your seats and find out whether this sleek-looking quadcopter can actually deliver in this comprehensive and honest Ruko F11 Pro review. 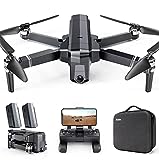 The Ruko F11 Pro is equipped with a GPS module to augment its smart assistive functions, as well as provide a stable and consistent flight performance during operation. This has the drone communicating with several satellite units to triangulate its location on the map accurately. This makes drifting virtually non-existent, as the drone is able to adjust its position in real-time to correct any errors.

Furthermore, the GPS Hold function is similar to the Altitude Hold of most advanced drones nowadays, which relies on the GPS to literally hold its position and altitude, making it easier for you to take videos and pictures with the stability it offers.

Even beginners can enjoy flying the Ruko F11 Pro with its One Key Takeoff and Landing feature that allows the pilot to forgo the tedious maneuvers needed for initialization or retrieval, as most newbies tend to crash the drone by just trying to fly it. Plus, lazy pilots can rejoice as well, with the automated feature doing the hard work so that you don’t have to.

Another beginner-friendly flight feature is Headless Mode. Headless mode allows the drone to ignore its own front-end orientation and instead relies on the own pilot’s front orientation to fly. This makes controlling the craft a straightforward affair, as you won’t have to keep tabs on the drone’s 3D position.

If you push the directional lever to the left, the drone will turn left. The same happens with the other directions, making flying a simple and easy task to do.

This is the Orbit function of the Ruko F11 Pro. It allows the drone to select a subject of your choice and do a 360° sweep around it, training the camera towards the subject at all times. This is handy if you want a cinematic pan around your subject — and you don’t even have to do anything except activate the mode and wait for the shot to finish.

Point of Interest has a 100-meter radius limit, which is incredible as this will allow you to take panoramic shots of larger subjects such as buildings and other structures.

Even most entry-level drones feature Return to Home these days, but it’s good to see that basic features aren’t being overlooked. The Return To Home function protects against signal loss, low battery levels, and other unavoidable flight errors that might put the drone’s safety at risk.

The way this works is simple: the drone records its initial takeoff location and retraces it via GPS when the mode is active or initiated.

For solo travelers or those who just want a hands-free filming experience without sacrificing shot composition at all. Just set your desired subject via the smartphone app, and the Ruko F11 Pro will track it at a constant distance and speed while keeping the subject in the frame. This makes for great dramatic shots, especially with a vast expanse of nature to fill the background.

The drone sports a 2500 mAh intelligent battery that provides up to 30 minutes of flight time, on paper. In real life, however, when put up against a bit of wind and making use of its flight features, we found it was only able to supply around 25 minutes. This isn’t too bad, and we even go so far to say we’re impressed with it, as not all $300 drones can achieve such a feat.

Ruko even throws in an extra pack in the kit to double that beastly juice capacity.

The intelligent modular battery also has built-in charge level indicators to give you a ballpark figure of its current juice content.

The Ruko F11 Pro has a camera that lets you shoot 2.7K videos at Ultra High Definition, while stills can go up to 8.3-MP, making for extremely detailed still shots, capturing everything with the 120° field of view its wide-angle lens offers.

That being said, the Ruko F11 Pro doesn’t fare too well in terms of color reproduction, though this is the Achilles’ heel of most drones in its price range. Honestly, this is being a little picky to try to find faults.

Gimbal stabilization is unfortunately nowhere in sight, although you do get a 90° adjustable range of motion to change perspectives. Without a gimbal, your footage is always going to be a little shaky at best.

The Ruko F11 Pro can definitely be used for content creation, but if you want professional-grade footage and pictures, we suggest bumping up your budget by a considerable margin.

We love the controller’s sleek and small form factor, opting for a more professional vibe with its flat black finish.

Populating the controller’s face are two joysticks at opposite ends, with four dedicated buttons scattered symmetrically across it. The LED indicators in the middle indicate the status of some important telemetry functions like battery level and pairing status.

Its antennas are dummies, however, only there to serve an aesthetic purpose. Why? We don’t know.

The Ruko F11 Pro adopts the foldable quadcopter design, making it a neat package to transport. Make no mistake, though, the drone has some meat to it, weighing about half a kilogram in its lonesome.

The drone is built from durable materials, specifically ABS plastic, with some reinforcement from aluminum parts. This makes the Ruko F11 Pro resilient against crashes and collisions, which might happen since it does not have obstacle detection sensors.

Aesthetics-wise, the Ruko F11 Pro doesn’t conform to the current trend of the curvy quadcopter look and instead relies on its sleek lines that emphasize its profile, looking like a professional tool altogether. Its grey color scheme also gives it a neutral vibe that’s neat and classy, although we can’t help but think how it looks like the Sony Handycams of days bygone.

The Ruko F11 Pro isn’t the fastest bird around, but it still manages to reach 43.2 kph at max speed; still a nimble craft in its own right.

It responds well to control inputs, with its 2.4 GHz controller band allowing it to fly over 1.2 kilometers with relative ease. The higher-precision 5 GHz band, however, is limited to about 500 meters, and the FPV mode cuts off as you near this boundary.

Balance is no issue for the Ruko F11 Pro, with its healthy weight providing counterbalance against rouge breezes, and is complemented by the GPS regulating its position automatically. Brushless motors are outfitted into each arm, giving the Ruko F11 Pro excellent flight performance, and is capable of providing calibrated speeds with a three-speed selection option.

These brushless motors are extra-efficient, produce less friction and heat, last longer, and are generally an all-round improvement from their brushed relatives.

The Ruko F11 Pro is indeed impressive, given its spread of features and specs.

For a drone in this price bracket, we certainly aren’t settling down for so-so units, and this UAV just proved our point. User-friendly features win us with their charms, the beefy 25-to-30-minute battery provides tons of flight fun and learning, and the 2.7K camera offers next-level clarity and quality, despite some issues with color.

While the foldable quadcopter could use some tweaking with its design — preferably a gimbal for image stabilization — no sane reviewer would not recommend this amazing craft, which is definitely a win at its current price point.

Whether it be an introductory gift to someone who’s itching to get into flying drones or dynamic content creation (or both), the Ruko F11 Pro fits the bill well either way.

5 thoughts on “Ruko F11 Pro Review: Is This A DJI Mavic Air Alternative?”